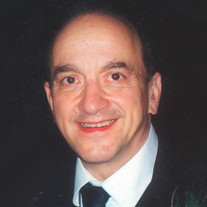 Judge John J. Thomas, 71, of Forty Fort died unexpectedly after being stricken ill at his home on Thursday, February 7, 2019. Born January 4, 1948 in Wilkes-Barre he was a son of the late Thomas C. and Alice C. Thomas. Judge Thomas was a graduate of Saint Mary's High School, Class of 1965. He earned his BS in Business Administration from King's College in 1969 and his Juris Doctorate from Dickinson School of Law in 1972. John started his career in law as a public defender in Luzerne County and had a private practice focusing on bankruptcy law until 1992, at which time he was appointed as a Judge of the United States Bankruptcy Court for the Middle District of Pennsylvania. A lover of nature, John enjoyed canoeing, camping, and birdwatching. He enjoyed taking road trips and traveled extensively, visiting all fifty states. His greatest love was his family. His sisters, Miriam Noussair, Theresa Habib, Thalia Ann Thomas, and Janice Joseph, and an infant brother, Charles, preceded him in death. He will be greatly missed by his wife, the former Marilyn Eglavich; sons, John and his wife Greta of New York City, Edward of San Francisco, and Joseph and his wife Jessica of Forty Fort; daughters, Kathryn of Forty Fort and New York City, and Jennifer and her husband Henry Sucart of Melbourne, Florida; grandsons, Johnny, Lincoln and Connor; brother, Thomas C. Thomas, Jr. of Forty Fort; nieces, nephews, other family and friends. Celebration of John's Life will be held Monday, February 11, 2019 with visitation from 9 to 11 AM at McLaughlin's, 142 South Washington Street in Wilkes-Barre followed by a Funeral Mass at 12 PM at Immaculate Conception Church on Luzerne Avenue in West Pittston. Interment will be in Saint Mary's Cemetery in Hanover Township. Memorial donations are preferred and may be made to St. Jude's Children's Research Hospital. Memories and condolences may be shared with John's family at www.celebratehislife.com

Judge John J. Thomas, 71, of Forty Fort died unexpectedly after being stricken ill at his home on Thursday, February 7, 2019. Born January 4, 1948 in Wilkes-Barre he was a son of the late Thomas C. and Alice C. Thomas. Judge Thomas was a graduate... View Obituary & Service Information

The family of Judge John J. Thomas created this Life Tributes page to make it easy to share your memories.