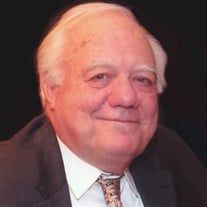 John E. O’Connor, Sr of Kingston was greeted in Heaven by family and friends on December 21, 2019. Born August 22, 1940 in Kingston he was a son of the late Patrick J. and Helen McAndrew O'Connor, John was a great storyteller and conversationalist, and all who met him understood that John valued his family and faith which brought so much meaning to his life. His faith began at St. Ignatius Parish where he was a life long member and deacon. He was part of the first graduating class of West Side Central Catholic High School in 1958. Upon graduation, he attended King’s College where he graduated with honors in 1962. He furthered his education at Georgetown University Law Center where he graduated in 1965 before clerking for Pennsylvania Supreme Court Justice Benjamin R. Jones. And yet, his love of learning continued in 1999 as he was ordained a deacon in the Diocese of Scranton in November and also earned a Master’s degree in Marriage & Family Therapy from Kutztown University. John began his law career as a founding partner of Flanagan, Doran, Biscontini, & Shaffer before joining with colleague and friend Thomas F. Burke, Jr. and his brother Joseph D. Burke in Forty-Fort where he maintained his professional career. As an attorney, John enjoyed being a local community solicitor for Larksville and Pringle Boroughs, was General Counsel for the Pennsylvania State Workers Insurance Fund, and he was recognized as a member for 50 years of service with the Wilkes-Barre Law & Library Association in 2015. However, one of his greatest passions blended his working life with his faith as being the homilist for the association's annual Red Mass at King's College each year. His faith was rooted in his Catholic upbringing and solidified within his own family and loving wife of 55 years Mary Moran. This loving pair were involved with Pre-Cana classes, Cursillo, and the Fatima Center in Dalton. John was a Mercy Associate, founding member of the Diocese of Scranton Family Life Bureau, Wyoming Valley Catholic Social Services Board, Catholic Youth Services Board Member, and St. Thomas More Society. He so enjoyed helping out at St. Ignatius with CCD classes, hosting the homeless, or assisting with the Food Pantry. Most important to John was his family. He was the proud and loving father of seven children and nine grandchildren and looked forward to any time that could be spent with them. In particular, the summer vacations, picnics, and family get-togethers, in addition to any one of the activities in which his children or grandchildren were involved. Recently, he always enjoyed spending Thanksgiving in Avalon, New Jersey where there was a constant blend of family with all of his brothers and sisters, nieces and nephews, in-laws, and his own family. While at the beach he enjoyed cooking his famous clam chowder, watching the family football games, reading, and catching up with the O’Connor Family. John will be greatly missed by his wife, Mary Moran O'Connor; children, Moira and her husband John Servis, Patrick and his wife Eileen, John and his wife Erin, Michael and his wife Kathryn, Megan, Timothy and his wife Tracie, Matthew and his wife Amanda; grandchildren, Stephen, Andrew, Kieran, Conal, Maggie, Nicholas, Bailey, Molly and Charlotte; siblings Patricia (Daniel) Curran; Maureen (William) Casey, Patrick (Marie) O'Connor; Joseph O'Connor, Kevin O'Connor, Michael (Ellen) O'Connor; James (Mary) O'Connor, Thomas (Rose Ann) O'Connor, Mary Ellen (Daniel) McCormick; nieces, nephews, other family and friends. Celebration of John's Life will take place in the Church of Saint Ignatius Loyola, North Maple Avenue in Kingston. Visitation will be held from 3 to 7 pm on Sunday, December 29th. A Pontifical Funeral Mass will be celebrated by the Most Reverend Joseph C. Bambera, D.D., J.C.L., Bishop of Scranton at 10 AM on Monday, December 30th. In lieu of flowers please make a donation to a charity of your choice or one of John’s passions such as the Catherine McAuley House in Plymouth, PA, St. Ignatius Parish, or King’s College in his memory. Memories and condolences may be shared with John's family at www.celebratehislife.com

John E. O&#8217;Connor, Sr of Kingston was greeted in Heaven by family and friends on December 21, 2019. Born August 22, 1940 in Kingston he was a son of the late Patrick J. and Helen McAndrew O'Connor, John was a great storyteller and conversationalist,... View Obituary & Service Information

The family of John E. O'Connor Esq. created this Life Tributes page to make it easy to share your memories.

John E. O’Connor, Sr of Kingston was greeted in Heaven by family...