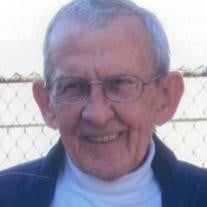 John M. Mooney, 80, of Almond Lane in Wilkes-Barre died Thursday at the Department of Veteran Affairs Medical Center. Born December 6, 1931 in Wilkes-Barre he was a son of the late Eugene and Virginia Gallagher Mooney. Jack was a graduate of G.A.R. Memorial High School. An Army veteran of the Korean Conflict, he served from 1952 to 1954. Jack worked for RCA and its successor, Harris Semiconductor in Mountain Top for more than twenty years. Before retiring in March, he was employed by the City of Wilkes-Barre for the past ten years. For many years he assisted local residents through the operations of Jack's Lawn Service. Jack was a member of the Parish of Saint Andrew and a communicant at the Church of Saint Patrick where he served as an usher. He was an avid Yankees fan and an ardent supporter of G.A.R. athletic teams and Mayflower Little League Baseball through its Mayflower 288 Club. In his younger days, Jack was a proud member of the musical group, The Kingsmen. His wife, Mildred Hossage Mooney died in 1997. A son, John, grandson, Bradley, sister, Marion Pachick, and brothers, Eugene, Thomas, Paul, Leo and Vincent Mooney also preceded him in death. He will be greatly missed by his children, Michael and his wife Gloria Mooney of Wilkes-Barre, Martin and his wife Rhonda Mooney of Wilkes-Barre and Jacqueline Ankner and her fiancé Eric Leonard of Wilkes-Barre; daughter-in-law, Lorrie Fritz of Wilkes-Barre; grandchildren, John, Kathleen and Christine Mooney, Ryan and his wife Lisa Mooney and Brandis and her husband Chris Dohman, Martin Keith, Heather and Ashley Mooney, Amanda, David and Jeffrey Ankner and Erin Leonard; great-grandchildren, Keirsi, Tyler, Jadyn, Ethan and Samuel; brother, Francis Mooney of Buffalo, New York; sisters, Bernadine Ellis of Hanover Township, Bernice Hockenbury of Hanover Township and Virginia Borum of Wilkes-Barre; nieces, nephews, cousins and friends. Celebration of Jack’s Life will be held Monday at 9 AM from McLaughlin's - The Family Funeral Service, 142 South Washington Street in Wilkes-Barre with Funeral Mass at 10:00 AM in the Church of Saint Patrick. Entombment will be in St. Mary's Mausoleum in Hanover Township. Visitation will be held at McLaughlin's on Sunday from 2 to 4 and 7 to 9 PM. Permanent messages and memories can be shared with Jack’s family at www.celebratehislife.com

John M. Mooney, 80, of Almond Lane in Wilkes-Barre died Thursday at the Department of Veteran Affairs Medical Center. Born December 6, 1931 in Wilkes-Barre he was a son of the late Eugene and Virginia Gallagher Mooney. Jack was a graduate... View Obituary & Service Information

The family of John Mooney created this Life Tributes page to make it easy to share your memories.