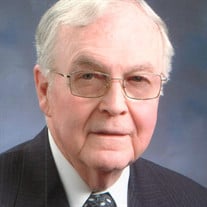 John D. ‘Jack’ McCarthy, 79, of Kingston and Harvey’s Lake passed away on January 27, 2015 at Wilkes-Barre General Hospital after a short illness. Born June 19, 1935 in Wilkes-Barre he was a son of the late Joseph J. and Claire Kilcoyne McCarthy. A graduate of Saint Mary’s High School and King’s College, Jack’s love of cars led him to his beautiful wife, the former Cecilia ‘CeCe’ Corgan; her family owned the local Ford dealership and she drove a bright red convertible. Their common interests in family, community and church solidified their loving relationship. They wed in 1959 and would have celebrated their 56th anniversary in May. Jack started working in the family business, McCarthy Tire Service, at the age of twelve. He rose from oil-bottle cleaner, to gas pumper, to salesman, to president. In his later years he assumed the title of CEO as he turned the business over to his children. He was extremely proud of the McCarthy Tire team, and the business was recently named the 6th Largest Commercial Tire Dealer in North America, amassing forty-four locations in seven states with nearly one thousand employees. Jack’s interests didn’t stop with tires; his strong commitment to the community in which he lived and worked has benefited many. He was Chairman of the Board of Wilkes-Barre General Hospital for twenty-six years. These years of devotion to the hospital led to the lobby being dedicated in his name. He was also Chairman of the Board of the Wilkes-Barre Housing Authority for twelve years and served on numerous boards, including Pennsylvania American Water, Blue Cross/Blue Shield, United Penn Bank, Continental Bank, Little Flower Manor and the Diocesan Finance Council. Jack’s philanthropy extended to numerous organizations, including King’s College which dedicated the McCarthy Stadium in his name, and Bishop Hoban/Holy Redeemer High School which dedicated its auditorium to him. He was also supportive of Misericordia University, the Catholic Youth Center, and the American Heart Association to name a few. Jack was named Citizen of the Year by the Wilkes-Barre Lions Club, Man of the Year by the Friendly Sons of St. Patrick, and Small Businessman of the Year by the Wilkes-Barre Chamber of Commerce. He was the recipient of the Crystal Rose Award from Little Flower Manor. Numerous other organizations have also honored him for his contributions to the community. Jack was a member of the Fox Hill Country Club, the Westmoreland Club and Fourth Degree member of the Knights of Columbus. He also had a long affiliation with Wyoming Valley Country Club where the McCarthy Classic is named in his honor. He was a lifelong parishioner at the Church of Saint Mary of the Immaculate Conception. Jack thoroughly enjoyed sharing his diverse interests and knowledge with his three children. With his oldest daughter Mary Ellen ‘Mel’, deep family traditions; with his daughter Kathleen ‘Katie’, financial knowledge; and with his son John, all things ‘tire’. He also shared his wisdom with his grandchildren; wanting them to know that peanut butter goes with everything and that all cars should be black and clean. Jack enjoyed spending time with family at his two favorite vacation spots; Disney World and the Jersey Shore. He also enjoyed the summers he spent at Harvey’s Lake where he would be frequently seen manning his pontoon boat filled with friends on summer evenings. A grandson, Andrew McCarthy and brother, Frank McCarthy preceded him in death. He will be greatly missed by his wife, CeCe; daughters, Mary Ellen Horn and her husband Neil of Kingston and Kathleen Lambert and her husband Gary of Wyoming; son, John and his wife Lynn of Trucksville; grandchildren, who were his pride and joy, Meghan Horn Upton and her husband Dan of Kingston, Colleen Horn Doyle and her husband Patrick of Shavertown, Daniel Horn and his fiancée Jacqueline Wheatley of Kingston, Gary Lambert, Jr. and his wife Tara of Wyoming, Mary Kate Lambert and Timothy Lambert of Wyoming and John D. McCarthy, III of Trucksville; three great-grandchildren, Liam and Cormick Upton and Claire Doyle; brother, Joseph J. McCarthy of Michigan; nieces, nephews, other family and friends. Celebration of Jack’s Life will begin Friday with visitation from 3 to 7 PM in the Church of Saint Mary of the Immaculate Conception, 130 South Washington Street in Wilkes-Barre. Funeral Mass will be celebrated Saturday at 10 AM. Interment will be in Saint Mary’s Cemetery. In lieu of flowers, memorial donations may be made to the Catholic School Endowment Fund for the Diocese of Scranton, 300 Wyoming Ave, Scranton, PA 18503 or to a charity of the donor’s choice. McLaughlin’s is assisting Jack’s family with arrangements. Memories and condolences may be shared with Jack’s family at www.lifecelebrations.com

The family of John D. McCarthy created this Life Tributes page to make it easy to share your memories.