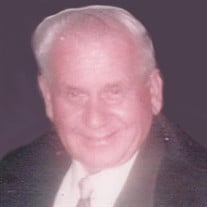 John Patrick Hoolick, Jr. (Sarge), 88, of Lower Askam went home to be with the Lord on All Saints Day, Thursday, November 1, 2018. Born March 17, 1930 in Warrior Run he was a son of the late John Patrick and Mary Kowalchik Hoolick. He was a graduate of Warrior Run High School. On August 18, 1948, John enlisted with the United States Air Force and served in the Korean Conflict and as a recruiter through the Vietnam Era before retiring as a Master Sergeant in 1968 after more than twenty years of service to our country. After retiring from the Air Force, Sarge turned to his love of driving with Shulman Air Freight for 10 years, as a patient transfer driver for Danville State Hospital and finally, driving a school bus for Hanover Area students for several years before retiring. John was dedicated to God, his family, and our country. He was a member of the Transfiguration of Our Lord Ukrainian Catholic Church, where he was active with the Holy Name Society and as chairman of the annual Ukrainian Festival. He was also active with the former Saint Ann's Parents Guild, and as a member of the Knights of Columbus Assumpta Council 3987. He was an automotive enthusiast and diehard Phillies fan who enjoyed many games with his family through the years. A sister, Mary Hoolick, preceded him in death. He will be greatly missed by his loving family, including his wife, the former Mary Louise Ward; children, Theresa and her husband Merl Ashton of Katy, Texas, Margaret James of Kingston, Mary Ellen and her husband Joseph Morris of Lake Silkworth, Joann Rovinski of Lower Askam, Judy and her husband Andy Holda of Ashley, and John P. and his wife Angee Hoolick of Hanover Green; grandchildren, Tracy and her husband Will Borel of Houston, Texas, Robert Moyer and his fiancée, Courtney Saba, Alyssa James and Michael James of Kingston, Joseph and his wife Sheila Morris of Iowa, Matthew and his wife Melissa Morris of Plymouth, Stosh Rovinski and his partner Eric Davis of Saucon Valley, Rachael Rovinski and her fiancé Jimmy Schwerdtman of Shavertown, Stacy and her husband Jonathon Hart of Hanover, Jeffrey and his wife Farahnaz Holda of Olney, Maryland, Mary Jo Hoolick and her fiancé John Boylan of Lyndwood, Emily and her fiancé Ron Rouse of Forty Fort, and Ethan Hoolick of Houston, Texas; great-grandchildren, Trip and Kennedy, Abigail, Harper, Brooke, Gracie and Gabriella, Elise and Vivienne, Bella, Julian and Mila; other family and friends. Celebration of John's Life will begin Sunday, November 4, 2018 with visitation from 4 to 7 PM with Parastas at 7 PM at McLaughlin's, 142 South Washington Street in Wilkes-Barre and continue there on Monday with gathering at 10 AM followed by a Funeral Service, Poxoron at 11 AM in Transfiguration of Our Lord Ukrainian Catholic Church in the Hanover Section of Nanticoke. Full military honors will be provided by the United States Air Force and AMVETS Honor Guard Post 189, Greater Pittston.

John Patrick Hoolick, Jr. (Sarge), 88, of Lower Askam went home to be with the Lord on All Saints Day, Thursday, November 1, 2018. Born March 17, 1930 in Warrior Run he was a son of the late John Patrick and Mary Kowalchik Hoolick. He was a... View Obituary & Service Information

The family of John Patrick Hoolick Jr. created this Life Tributes page to make it easy to share your memories.