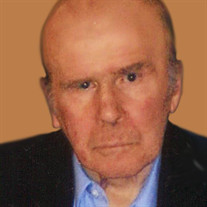 John H. Hinchey, III, 75, passed peacefully from this life surrounded and comforted by his brothers on October 26, 2016. Born July 10, 1941 in Forty Fort he was a son of the late John H. Hinchey, Jr. and Margaret Jennings Hinchey. In his youth, Jack played in the band and wrestled varsity at Central Catholic High School, where he graduated in 1960. A lifelong devoted member of St. Ignatius Roman Catholic Church in Kingston, Jack was also an Eagle Scout and later a member of the Wilkes-Barre Knights of Columbus. An avid outdoorsman in his younger days, he loved hunting, fishing and skating and enjoyed as well a spirited but friendly game of poker. In addition, Jack was a member of the Wyoming Valley Ski Club and the Wilkes-Barre Friendly Sons of St. Patrick. He was also a member of Fox Hill Country Club (though his reported hole-in-one happened in Florida). Jack spent his working years as partner in Matheson Warehouse and Transfer Company, a business inherited from his father and shared with his brothers. Though he always doted on all children, Jack was known among friends and family for his acerbic wit. Jack will be greatly missed by his brothers, Frank Hinchey and wife Carol; Michael Hinchey and wife Sharon; Edward Hinchey and wife Pat; nieces Erin Hinchey, Bridget Mack and husband Brian; Westyn Gibbons and husband Brendan; Shawna Mulcahy and husband Brian; Collyn Hinchey; nephews Frank Hinchey, Jr. and wife Misato; and E.M. Hinchey and wife Kristina as well as several great nieces and nephews; other family and friends. Jack’s entire family is grateful for the tremendous care shared with him over the past eleven years by the staff of Riverstreet Manor. Celebration of Jack’s Life will begin Friday with visitation from 4 to 7 PM at McLaughlin’s, 142 South Washington Street in Wilkes-Barre and continue there Saturday with gathering at 8:15 followed by a Funeral Mass at 9 AM in the Church of Saint Ignatius Loyola in Kingston. Interment will be in Saint Mary’s Cemetery in Hanover Township. Memories and condolences may be shared with Jack’s family at www.lifecelebrations.com

John H. Hinchey, III, 75, passed peacefully from this life surrounded and comforted by his brothers on October 26, 2016. Born July 10, 1941 in Forty Fort he was a son of the late John H. Hinchey, Jr. and Margaret Jennings Hinchey. In his youth,... View Obituary & Service Information

The family of John H. Hinchey III created this Life Tributes page to make it easy to share your memories.