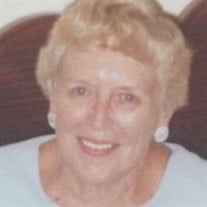 Joan Marie Kenney Mangan of Bear Creek passed away on February 14th at the age of 80 at Timber Ridge Health Care Center after an illness. Joan was the daughter of the late William and Mae Williams Kenney. She graduated from St. Mary's High School, Mercy Hospital School of Nursing and received a bachelor's degree in Nursing from Seton Hall University. She was employed at St. Mary's Hospital in Orange, NJ as head nurse. She was a founder and first president of Essex County Catholic Nurses. Joan returned to Wilkes-Barre to marry Joseph Mangan who was her husband of 48 years until his death in 2012. During her marriage, Joan served on the Scranton Diocese Board of Directors under Bishop McCormick. She also served on the Wyoming Valley CYC Board of Directors and volunteered at the St. Vincent de Paul Soup Kitchen since its inception. She worked for the American Red Cross NEPA Blood Services until her retirement. Joan's interests included the St. Elizabeth's Women's Guild in Bear Creek, the Donegal Society, and the search committee for Project Children. She was a Eucharistic Minister at St. Elizabeth's for many years and loved bowling every week with her women's bowling league. Joan was preceded in death by her husband, Joseph Mangan, son-in-law, Donald Shaw, brother, James Kenney and a sister, Phyllis O'Connell. Surviving are her her children, Mollie Mangan of Wilkes-Barre, Heather Shaw of White Haven, Deirdre Daesen and her husband Steve of Wrentham, MA, Marlene Mangan of Bear Creek, and Joseph Mangan of Phoenix, AZ; grandchildren, Donald and Dillon Shaw, Mariel Schramm and Ryan Daesen; sisters, Ellen Wallace and Mary Keating Celebration of Joan's Life will begin Sunday with visitation from 4 to 7 PM at McLaughlin's, 142 South Washington Street in Wilkes-Barre and continue on Monday with a Funeral Mass at 10 AM in the Church of Saint Elizabeth in Bear Creek. Interment will be in St. Mary's Cemetery. Donations can be made in Joan's memory to St. Vincent de Paul Kitchen, 39 E. Jackson St., Wilkes-Barre, 18701. Memories and condolences may be shared with Joan's family at www.celebrateherlife.com

Joan Marie Kenney Mangan of Bear Creek passed away on February 14th at the age of 80 at Timber Ridge Health Care Center after an illness. Joan was the daughter of the late William and Mae Williams Kenney. She graduated from St. Mary's High... View Obituary & Service Information

The family of Joan Kenney Mangan created this Life Tributes page to make it easy to share your memories.