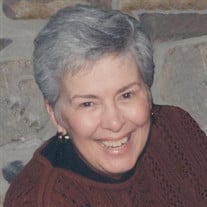 Joan Betzler Adams, of Wilkes-Barre, died April 25, 2020. Born in Wilkes-Barre she was the daughter of the late Herman and Elizabeth Betzler. Joan was a 1948 graduate of G.A.R. High School where she was an honor student and cheerleader. Joan met her husband Charles “Ace” Adams in the summer of 1949, and they married in October 1951 at St. Boniface church in Wilkes-Barre. After marriage, they lived in Arlington, San Diego, Chicago and Philadelphia, before returning to Kingston in 1963. During these many years of travel, Joan became a homemaker, raising four children. Joan enjoyed golf and social activities as a member of Wyoming Valley CC for more than twenty-five years, especially the wonderful friendships she had with her golfing buddies. Joan and Ace enjoyed spending winter months after retirement in Florida and South Carolina. She was known for her exuberant personality, straight-talk and love of laughter. Joan was preceded in death by her husband, Charles, on June 25, 2019. Joan will be greatly missed by her children, Mark Adams and wife Kimberly of Vancouver, WA, Susan Coombs and husband Lonnie Coombs of Blue Bell, PA, Paula Adams of Edwardsville, and Matthew Adams and wife Michele of Philadelphia; her nine grandchildren, Matthew Adams of Seattle, Tessa Adams and husband Adam Kahraman of Beverly Hills, Jenna Adams of Santa Barbara, Brian Coombs and wife Heather of Conshohocken, Adams Coombs of Blue Bell, Abigail Coombs and husband Nate Lourie of Boston, Mackenzie, Carly and Anna Adams of New York City; and her brother, Mark Betzler. Joan's family is grateful for the extraordinary care and compassion which the management and staff of Highland Park Senior Living shared with her during her time in the memory care residence there. Celebration of Joan's Life will be scheduled at a later date for family and friends. Memories and condolences may be shared with Joan’s family at www.celebrateherlife.com

Joan Betzler Adams, of Wilkes-Barre, died April 25, 2020. Born in Wilkes-Barre she was the daughter of the late Herman and Elizabeth Betzler. Joan was a 1948 graduate of G.A.R. High School where she was an honor student and cheerleader.... View Obituary & Service Information

The family of Joan Betzler Adams created this Life Tributes page to make it easy to share your memories.