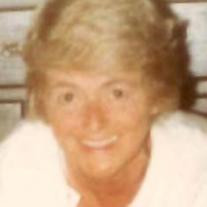 Jeanne M. Williamson, 82, formerly of Oak Street in Wilkes-Barre died Friday at Tiffany Court in Kingston. Born August 15, 1929 in Wilkes-Barre she was a daughter of the late Magnus and Florence Meighan Gartner. A 1947 graduate of E.L. Meyers High School, Jeanne continued her education at Misericordia University and King's College. Jeanne was employed by the City of Wilkes-Barre Tax Office for twenty-six years before retiring as director in 1992. She later worked part-time as a teacher aide for the Wilkes-Barre Area School District and volunteered her time as an usher at the F.M. Kirby Center for the Performing Arts. Jeanne was a member of the Parish of Saint Robert Bellarmine and a long-time communicant at the Church of Saint Aloysius. She was also a member of the Geisinger (Mercy) Hospital Auxiliary, South Wilkes-Barre Card Club, and participated in bowling leagues at Stanton Lanes, and served on the Democratic Committee for District 15-5. Jeanne loved spending time with family, especially around a pool or on picnics. She enjoyed going to restaurants and traveling to the shore, Florida and Jamaica. Her husband, Vincent H. Williamson died June 7, 1999. A sister, Betty Collins and brothers, James Gardner and John Gartner also preceded her in death. She will be missed by her children, Vincent and his wife Pam Williamson of Sweet Valley, Michael and his wife Donna Williamson of Wilkes-Barre, Patrick and his wife Suzanne Williamson of Wilkes-Barre and Mary Anne and her husband Joe Intelicato of Mountain Top; grandchildren, Michelle, Brittni, Vinnie, Brian, Jillian and Andrea Williamson, Melanie and Emily Leo; great-granddaughter, Kenzie Williamson; sister, Chardell Narcum of Forty Fort; brother, William and his wife Ursula Gardner of Pennsville, New Jersey; nieces, nephews, cousins and friends. Jeanne’s entire family is grateful for the kindness and compassionate care given to her by the staff of Tiffany Court. Family and friends are invited to join in the Celebration of Jeanne’s Life in a Funeral Mass on Tuesday at 10 AM in the Church of Saint Aloysius, Barney and Division Streets in Wilkes-Barre. Interment will be in Saint Mary's Cemetery in Hanover Township. Visitation will be held on Monday from 4 to 7 PM at McLaughlin's – The Family Funeral Service, 142 South Washington Street in Wilkes-Barre. Memorial donations are preferred and may be made to Saint Aloysius Building Fund, 143 West Division Street, Wilkes-Barre, 18702 or the charity of your preference. Permanent messages and memories can be shared with Jeanne’s family at www.celebrateherlife.com

Jeanne M. Williamson, 82, formerly of Oak Street in Wilkes-Barre died Friday at Tiffany Court in Kingston. Born August 15, 1929 in Wilkes-Barre she was a daughter of the late Magnus and Florence Meighan Gartner. A 1947 graduate of E.L. Meyers... View Obituary & Service Information

The family of Jeanne Williamson created this Life Tributes page to make it easy to share your memories.