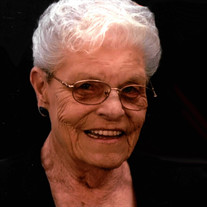 Jean Marie Roberts, 85, of Kingston died September 15, 2017. Born March 13, 1932, in Scranton she was a daughter of the late George and Marie White Shoemaker. She was a graduate of Kingston High School and attended classes at Wilkes-Barre Business College. During her life, Jean worked at General Cigar and Dunkin Donuts in Kingston. She also worked at Sears, J.C. Penney and as manager of Design Galleries at the Wyoming Valley Mall prior to retirement. She retired early to serve as primary caregiver for her ailing husband Bill. She cared for his daily needs and became his advocate during his prolonged illness. When Bill was no longer able to speak on his own she served as his voice communicating with his doctors and nurses until his last moment. Jean was an active member of the Parish of Saint Nicholas. Jean abandoned full-time retirement and began working as a cafeteria aide at St. Nicholas St. Mary's School. She enjoyed interacting with the students, faculty, staff, and administration. During the late 1970's and early 1980's Jean served as Trip Chairperson for the Wyoming Valley West Band Parents Association. She worked alongside her husband Bill and WVW Band Director James Selingo raising money to fund trips to Orlando, Ottawa and Washington D.C. These trips allowed the band to compete on a national level. Jean enjoyed working at her parish at the St. Nicholas Bingo and serving as Chairperson of the "Flea Market" during the annual parish bazaar. She worked with many great volunteers to sort, price and sell donated items to raise funds during the three-day event. In addition to her parents, she was preceded in death by her stepfather, Francis P. Bonner, and her first husband, Trevor Morgan. She lost her second husband and "love of her life", William Andrew Roberts, on March 15, 1992. Sisters, Joan Roberts, wife of Bill's brother Dave, and Dr. Mary Patricia Coopman also preceded her in death. She will be greatly missed by son, Bob Morgan and his wife Marcy of Mountain Top; stepson, William J. Roberts and his wife Louise of Dallas; grandchildren, Monica Morgan, Robert Morgan, Jr., Douglas Roberts and his wife Annie of Philadelphia, and Alycia Roberts of Easton; great-grandchildren, Liam and Kayleigh Roberts; sister, Sally Norton; sister-in-law, Evelyn Shultz; nieces, nephews, cousins and friends. Jean's entire family is grateful for the care provided by healthcare professionals Dr. Leonard Kuchemba, Dr. Aman Ali, Dr. Peter Andrews and the nursing staff of Wilkes-Barre General Hospital CCU Department especially Betsy, Peter, and Marlene. Celebration of Jean's Life will begin Wednesday with visitation from 4 to 7 PM at McLaughlin's, 142 South Washington Street in Wilkes-Barre and continue there on Thursday with gathering at 9 AM followed by a Funeral Mass at 10 AM in the Church of Saint Nicholas. Interment will be in Fern Knoll Burial Park in Dallas. Memorial donations are preferred and may be made to St. Nicholas Church 226 S. Washington Street Wilkes Barre, PA 18702, the Wyoming Valley Children's Association 1133 Wyoming Avenue Forty Fort, PA 18704, or the charity of the donor's choice. Memories and condolences may be shared with Jean's family at www.celebrateherlife.com

Jean Marie Roberts, 85, of Kingston died September 15, 2017. Born March 13, 1932, in Scranton she was a daughter of the late George and Marie White Shoemaker. She was a graduate of Kingston High School and attended classes at Wilkes-Barre Business... View Obituary & Service Information

The family of Jean Marie Roberts created this Life Tributes page to make it easy to share your memories.