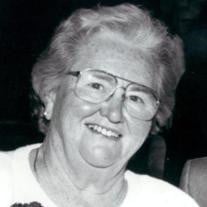 Jean Munley McCoskey, 91, of River Street in Forty Fort and formerly of Sugar Notch died Thursday in the presence of her loving and devoted family at Wilkes-Barre General Hospital. Born June 27, 1919 in Sugar Notch she was a daughter of the late Anthony J. and Lillian Gregory Munley. Jean was a graduate of Sugar Notch High School and earned her bachelor of arts, cum laude from Misericordia University in 1939. After serving as Administrative Assistant to the late Senator Martin L. Murray, Jean accepted a position as Probation Officer for the Luzerne County Juvenile Probation Department. In 1981, she became the first female appointed Chief Juvenile Probation Officer in the Commonwealth of Pennsylvania. She served in that capacity until her retirement in August of 1996. Jean was a member of the Parish of the Holy Family in Sugar Notch where she served as a Eucharistic Minister, and was a former president and secretary of the Altar and Rosary Society. She was a former member of the Pennsylvania Council of Chief Probation Officers and a Director and Secretary of the Luzerne County Federal Credit Union. During her tenure as Chief Juvenile Probation Officer, she was honored by the Pennsylvania Juvenile Court Judges' Commission for her outstanding work with children and youth. Jean traveled extensively and enjoyed golfing and annual trips to the Notre Dame campus during football season. Her husband, Joseph McCoskey died in 1981. Sisters, Elinor Kuchinski and Grace Alexander, and brothers, James, Anthony, William and John Munley also preceded her in death. She will be missed by her children, Dr. Joseph L. and his wife Mary McCoskey, and Jean Marie and her husband Attorney Michael J. Sgarlat; grandchildren, Kelsey McCoskey Nay and her husband Todd, Morgan McCoskey, Megan Sgarlat Prynn and her husband Dale, Dr. Caitlin M. Sgarlat, John Patrick Sgarlat, Attorney Liam J. Sgarlat, Michael J. Sgarlat, and Rory P. Sgarlat; great-grandchildren, Patrick Sgarlat and Macey and Tenley Nay; and a sister, Margaret Comitz. Celebration of Jean’s Life will be held Tuesday at 8:30 AM from McLaughlin’s, 142 South Washington Street in Wilkes-Barre with Funeral Mass at 9:30 AM in the Church of the Holy Family. Interment will be in Saint Charles Cemetery in Sugar Notch. Visitation will be held at McLaughlin's on Monday from 5 to 8 PM. Permanent messages and memories can be shared with Jean’s family at www.celebrateherlife.com

Jean Munley McCoskey, 91, of River Street in Forty Fort and formerly of Sugar Notch died Thursday in the presence of her loving and devoted family at Wilkes-Barre General Hospital. Born June 27, 1919 in Sugar Notch she was a daughter of the... View Obituary & Service Information

The family of Jean Munley McCoskey created this Life Tributes page to make it easy to share your memories.