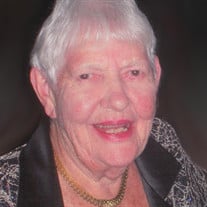 After a brief illness, Jean M. Foley of Mountain Top entered peacefully into eternal rest with her family at the bedside at her home on February 11, 2015. Born July 21, 1927 in Yonkers, New York, Jean was the daughter of the late Joseph E. and Katherine Murphy Cavanaugh. She received her bachelors in nursing at the College of Mount St. Vincent and was a clinical instructor in medical and surgical nursing at Flower Fifth Avenue School of Nursing in New York City. It was there that she met her future husband, T. Raymond Foley Jr. M.D. They married on June 28, 1952 and in 1956, Dr. and Mrs. Foley moved to Mountain Top where they raised their family. They were happily married for sixteen years until the tragic passing of Dr. Foley on April 29, 1968. Jean was the mother of her “five wonderful sons” as proudly proclaimed on a 1987 Route 309 billboard celebrating her sixtieth birthday. She was a founding member of the Parish of Saint Jude and the Mountain Top Bridge Club. She was an instructor at the Red Cross of Wyoming Valley and recently retired from her position as general manager of Cavanaugh’s Grille at the former Mountain Top Hotel. She was an active volunteer at the Kirby Library in Mountain Top. Her passions included bridge (affectionately known as the “Queen of Bridge”), reading, travel, and her many friends and family. Her son, Gerard died May 15, 1997. Jean will be greatly missed by her sons, Dr. T. Raymond Foley, III, M.D. and his wife Ann of Lancaster, Brian of Manahawkin, New Jersey, Kevin and his wife Alice of Mountaintop and Jim of Atlanta, Georgia; grandchildren, T. Raymond Foley, IV, M.D. of Denver, Colorado, Kerry F. Warznak and her husband Craig of Philadelphia, Michael K. Foley of St. Louis, Missouri, Katherine J. Foley of Lancaster, Maggie T., Laura J., and Nestor E. Foley of Atlanta, Georgia; step-grandchildren, John P. Mooney of Wilkes-Barre, Kathleen M. Mooney of West Chester, Christine L. Mooney of Mountain Top; great-grandchildren, Jack L. Warznak and Keirsi K. Mooney, and many nephews and nieces. Jean is also survived by her best friend and companion of many years, Robert J. Ell, and her honorary children, Bobby Ell and his wife Babette of Plains, Chrissy Darby and her husband Larry of Pittston, Bonnie and her husband Bruce Kunkle of Orange and honorary grandchildren, Zachary, Dalton, Greta, and Tucker Ell, Kate Darby, Bruce, husband of Dr. Cynelle Kunkle, Tami and Morgan Kunkle. Celebration of Jean’s Life will be held Saturday at 10 AM at McLaughlin’s, 142 South Washington Street in Wilkes-Barre with Funeral Mass at 11 AM in the Church of Saint Jude. Interment will be in Calvary Cemetery. Visitation will be held at McLaughlin’s on Friday from 4 to 7 PM. Memorial donations are preferred and may be made to the Marian Sutherland Kirby Library, 35 Kirby Avenue, Mountain Top, 18707, or to benefit Crestwood student athletes via the Jean M. Foley Scholarship Fund, P.O. Box 432, Mountain Top, 18707. Memories and condolences may be shared with Jean’s family at www.lifecelebrations.com

After a brief illness, Jean M. Foley of Mountain Top entered peacefully into eternal rest with her family at the bedside at her home on February 11, 2015. Born July 21, 1927 in Yonkers, New York, Jean was the daughter of the late Joseph E.... View Obituary & Service Information

The family of Jean M. Foley created this Life Tributes page to make it easy to share your memories.