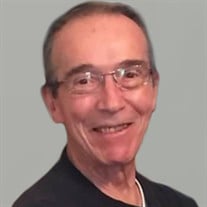 Jay Edward McGuire, 77, of Wilkes-Barre passed away peacefully on April 8, 2020. Born September 26, 1942 in Wilkes-Barre he was the son of the late Edward J. and Kathryn A. Brown McGuire. A graduate of Saint Mary’s High School in Wilkes-Barre and Wyoming Seminary in Kingston, Jay continued his education at Upsala College in New Jersey. Jay served our country as a Sergeant in the Air Force Reserve. On June 27, 1964, Jay was married to the love of his life, Carol Viglone. Together they raised their family. Jay followed his father’s footsteps into the world of real estate. He was a licensed real estate broker since 1964 and was a partner and principal owner of the Edward J. McGuire Company. As a Pennsylvania State Certified Appraiser, Jay specialized in appraising since 1972 and was the owner of McGuire Appraisal Company until his retirement in 2009. Jay was a member and past president of the Greater Wilkes-Barre Association of Realtors, and a member of the Pennsylvania and National associations. He was also a member of Northeast Chapter #92 of the Society of Real Estate Appraisers, which he previously served as Secretary-Treasurer. His sister, Rochelle, and her husband, Randy Brooks, preceded him in death. Jay will be greatly missed by his wife, Carol; children, Renee and her husband Michael Dopko of Mountain Top, Jay McGuire of West Chester, and Jill and her husband Ken Morris of Wilkes-Barre; grandchildren, Michael, Ryan, Nicholas and Joshua Dopko, and Erin and Sara Morris; a great-grandson, Luke Dopko; nieces, nephews, other family and friends. Jay’s family will celebrate his life privately. Memories and condolences may be shared with Jay’s family at www.celebratehislife.com

Jay Edward McGuire, 77, of Wilkes-Barre passed away peacefully on April 8, 2020. Born September 26, 1942 in Wilkes-Barre he was the son of the late Edward J. and Kathryn A. Brown McGuire. A graduate of Saint Mary&#8217;s High School in Wilkes-Barre... View Obituary & Service Information

The family of Jay Edward McGuire created this Life Tributes page to make it easy to share your memories.