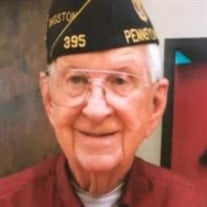 James J. Walsh of the Rolling Mill Hill Section of Wilkes-Barre passed away peacefully on June 30, 2020, at the age of 95. He had resided at Saint Luke's Villa in his final days. Born December 24, 1924 in the Minooka section of Scranton he was a son of the late Thomas and Agnes Moore Walsh. James was a graduate of Kingston High School and joined the US Army in May 1943. After enlisting in the Army, he went to various state-side bases for training and then shipped out to England in 1944. He served in the European theater of operations in France, Belgium, and Germany in World War II. Of significance, his Army unit supported combat operations during the Battle of the Bulge in December 1944. He was able to return home to Pennsylvania in March 1946 after the war ended. He married Margaret Gill, the love of his life, in 1946, and they had six children: James, Joseph, Mary Patricia, Timothy, Thomas, and Michael. He worked as a watch repairman in Wilkes-Barre until his retirement, working for more than sixty-five years in the Valley. James was a man of faith, courage, and service. He was a devoted and loving husband, father, grandfather, and great-grandfather who cherished and served his God, his wife and family, his friends, and his country, all of which he loved deeply. He lost his wife, Mrs. Margaret Gill Walsh, in 1984. She was a wonderful wife, mother, and grandmother, as well as the Walsh family's heart and soul. He was also preceded in death by his oldest grandson, Andrew Walsh, in 1979, and his brothers, Paul and Thomas Walsh, sister, Marie Walsh Cunningham, and daughters-in-law, Patti and Justine. James will be greatly missed by his children; Rev. James J. Walsh, Joseph Walsh, Mary Patricia Walsh Flanagan and her husband John, Timothy Walsh, Thomas Walsh, and Michael Walsh and his wife Arlene; sister, Agnes Walsh Williams; grandchildren, nieces, nephews, other family and friends. The funeral liturgy was limited to family only and was celebrated privately at the Church of Saint Patrick in Wilkes-Barre. Interment with military honors was in Saint Mary's Cemetery. Memorial donations to the Parish of Saint Andrew are preferred and may be sent to 316 Parrish Street, Wilkes-Barre, PA 18702. Memories and condolences may be shared with James's family at www.celebratehislife.com

James J. Walsh of the Rolling Mill Hill Section of Wilkes-Barre passed away peacefully on June 30, 2020, at the age of 95. He had resided at Saint Luke's Villa in his final days. Born December 24, 1924 in the Minooka section of Scranton he... View Obituary & Service Information

The family of James J. Walsh created this Life Tributes page to make it easy to share your memories.