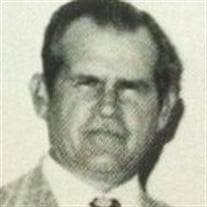 Jackson E. Hall of Wilkes-Barre passed away peacefully on Friday August 17, 2018. He was 89. Born February 26, 1929 in Spartanburg, South Carolina he was a son of the late Caleb Anderson Hall and Alice Smith Hall of Tennessee. His wife of seventy years, Dolores Poviliatus Hall, preceded him in death on March 28, 2018. “Mr. Jack” was founder and master mechanic of Hall’s Auto Service. His kind and honest work ethic grew the business now operated by his two sons on South Main Street, Wilkes-Barre. When he wasn’t cheering on the Phillies and Eagles, Jack enjoyed stopping by the garage for lunch, doing the books, washing his car, and simply hanging out with the guys of the Holeshots Car Club. Jack shared an automotive restoration passion with his sons and was very proud of his 1957 Pontiac Chieftain which was bestowed many accolades at local car shows. Jack was a member of the Church of Saint Mary of the Immaculate Conception for fifty years. His breadth of stewardship included playing an instrumental role in the creation of Our Lady of Fatima Blessed Grotto on North Street and the roles of PTA President and Marching Band bus driver at Bishop Hoban High School in the early 1980s. Jack was preceded in death by brothers, Lester, Al, Ronnie, Charlie and Benny; and a sister, Ophelia. Jack will be greatly missed by his children, Patricia Lavelle and her husband Tom of Swoyersville, Michael and his wife Diane of Plymouth, Mary Faymore and her husband Al of Hatfield, and John and his companion Sue Morris of Edwardsville; grandchildren, Sean Lavelle, Renee Lavelle, John Hall, Jr., and A.J. Faymore and his wife Saquiba; great-grandchildren, Cheyenne, Jada, Tori, Sean, Scott Lavelle, Madison Lavelle, and Julia Rasmowicz; and brothers, Louie, Harold, and Melvin. A Funeral Mass will be celebrated at 9:30 AM on Thursday August 23, 2018 in the Church of Saint Mary of the Immaculate Conception, 130 South Washington Street in Wilkes-Barre. Interment will be in Saint Mary’s Cemetery. Memorial donations to the Poor Box at Saint Mary’s Church are preferred. Memories and condolences may be shared with Jack’s family at www.celebratehislife.com

Jackson E. Hall of Wilkes-Barre passed away peacefully on Friday August 17, 2018. He was 89. Born February 26, 1929 in Spartanburg, South Carolina he was a son of the late Caleb Anderson Hall and Alice Smith Hall of Tennessee. His wife of... View Obituary & Service Information

The family of Jackson E. Hall created this Life Tributes page to make it easy to share your memories.

Jackson E. Hall of Wilkes-Barre passed away peacefully on Friday...