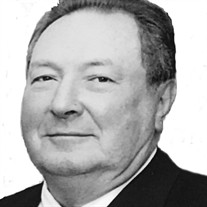 John Thomas Evers, 72, of Shavertown passed away at his home with his family and friends at his side on the evening of Thursday, July 7, 2016. He had recently been treated for esophageal cancer at the University of Pennsylvania but lost a courageous six month battle with the disease. Born April 26, 1944 in Wilkes-Barre he was the son of the late Thomas and Margaret Reese Evers. A 1962 graduate of Saint Mary’s High School, Jack was awarded a full scholarship to play basketball for Seton Hall University where he earned his degree in political science in 1966. Until his death he was an ardent supporter of Pirates basketball. Always proud to have served his country; Jack completed a twenty-month tour for the Army during theVietnam war. A hard working man, Jack retired from Fairchild after a transition from RCA and many buyouts. He met his wonderful wife Cappie (Downs) at RCA and they enjoyed a loving forty-six-year marriage at the time of his passing. Jack was always committed to his family and friends and continually saw the good side of everyone. Those who spent time with him enjoyed his quick wit and dry sense of humor. Jack was an avid golfer and member of the Wyoming Valley Country Club, and previously coached basketball at Wilkes-Barre Academy with his buddy, Michael Hirthler. In addition to his parents, a niece, Kimberly Mihalchik, and nephew, George Mihalchik, preceded him in death. Jack will be greatly missed by his wife Cappie; children, John T. Jr., of Shavertown, Samantha and her husband Vladimir Mundzic of Glencoe, Illinois and Erin and her husband Mark McLaughlin of Shavertown; four grandchildren, Riley Rose, Dimitri, Sebastijan and Jack; sisters, Nancy and her husband Richard Walton of Ashley and Maureen and her husband Joseph Mullen of Carlisle; sister-in-law, Cletta and her husband Harry Salavantis of Shavertown; nieces and nephews, Jennifer Dompkosky, Ambria Kramer, Stefanie Salavantis, Stephen Salavantis, Brittany Holly; Linda Walton Ceklosky, Beth Ann Pascoe, Jennifer Todaro and Joseph Mullen; other family and friends, including close friends, Adam and Diane Burick. Jack’s entire family is grateful for the kindness and compassion shared with him by Ursina Tietlebaum, MD and Katie Green, NP of the University of Pennsylvania as well as Mary Ann, Nancy, Lisa and Jennifer of Hospice of the Sacred Heart. Celebration of Jack’s Life will begin Monday with visitation from 4 to 7 PM at McLaughlin’s, 142 South Washington Street in Wilkes-Barre and continue Tuesday with a Funeral Mass at 9:30 AM in the Church of Saint Therese on Pioneer Avenue at Davis Street in Shavertown. Memorial donations be made to your preference of cancer research, treatment, or service centers, or to Hospice of the Sacred Heart. Memories and condolences may be shared with Jack’s family at www.lifecelebrations.com

John Thomas Evers, 72, of Shavertown passed away at his home with his family and friends at his side on the evening of Thursday, July 7, 2016. He had recently been treated for esophageal cancer at the University of Pennsylvania but lost a courageous... View Obituary & Service Information

The family of Jack 'Hoot' Evers created this Life Tributes page to make it easy to share your memories.

John Thomas Evers, 72, of Shavertown passed away at his home...