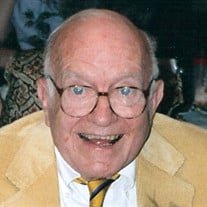 It is with much sadness that the Dolphin family reports the passing of their beloved patriarch, J. Murray Dolphin, M.D., F.A.C.S. Dr. Dolphin, late of Nandy Drive in Kingston, was a respected and innovative eye surgeon in the Wyoming Valley. Born August 16, 1921 in Wilkes-Barre he was the son of the late Dr. Joseph F. and Theresa Murray Dolphin. Dr. Dolphin matriculated to and graduated from the University of Pennsylvania where he attended with a full senatorial scholarship and was a member of the Alpha Tau Omega fraternity. He then attended Thomas Jefferson Medical College where he graduated with a degree in medicine and completed subspecialty training at New York Eye and Ear and Brooklyn Eye and Ear hospitals. An Army veteran of World War II, Dr. Dolphin served as a Captain with the Medical Corps. Dr. Dolphin was double-boarded in Ophthalmology and Otorhinolaryngology and joined his father in the practice of medicine. He was on staff at Mercy Hospital in Wilkes-Barre where he had the distinction of being the first practicing ophthalmologist to perform a successful corneal transplant in the Wyoming Valley. He was a kind and approachable doctor and possessed a keen sense of humor. Dr. Dolphin was a long-standing member of the Westmorland Club, an elected member of Skytop Lodge and a member and past-president of the Penn Alumni Club of Northeastern Pennsylvania. An enthusiastic and accomplished contract Bridge player, he achieved the vaunted status of Life Master. His wife, Georgia Leacacos Dolphin, died 22 June 2006. A sister, Betty Regan also preceded him in death. Surviving are children, Maureen Kasenchack of Kingston, Basil Dolphin, MD and his wife Eileen of Bethlehem, Jacques Dolphin and his wife Mary of Honesdale, Kip Dolphin, MD and his wife Donna of Ho-Ho-Kus, New Jersey and Quentin Dolphin, MD and his wife Lara of Holidaysburg; ten grandchildren who knew him affectionately as ‘Doc’; and a sister Nancy Moonan of Kingston Funeral will be held Tuesday at 10 AM from McLaughlin Family Funeral Service, 142 South Washington Street, Wilkes-Barre with Funeral Mass at 10:30 AM in Saint Ignatius Church in Kingston. Interment will be in Saint Mary’s Cemetery in Hanover Township. Friends, colleagues and former patients may attend visitation Monday from 7 to 9 PM and Tuesday from 9 to 10 AM

It is with much sadness that the Dolphin family reports the passing of their beloved patriarch, J. Murray Dolphin, M.D., F.A.C.S. Dr. Dolphin, late of Nandy Drive in Kingston, was a respected and innovative eye surgeon in the Wyoming Valley. Born... View Obituary & Service Information

The family of J. Murray Dolphin MD created this Life Tributes page to make it easy to share your memories.

It is with much sadness that the Dolphin family reports the passing...