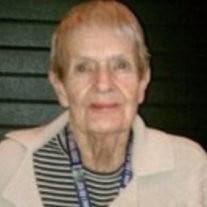 Irene Rose Collett Hannagan, 83, was fond of telling everyone she met that she was “one of eleven and raised seven.” She died Tuesday at Riverstreet Manor in Wilkes-Barre. Irene married her high school sweetheart, James Vincent Hannagan and together they raised three daughters and four sons in the family’s home in Kingston. Her family remembers her for her huge batches of molasses rock cookies, feisty and quick-witted personality, and love of roller coasters. It was not unusual to see Irene in the company of several brave small children being spun and tossed on amusement park rides at Knoebel’s Amusement Park or Great Adventure. She loved playing slot machines at casinos, Broadway shows, Irish step dancing and traveling to Florida and Ireland with her sister-in-law, Joanne A. Olshan. Irene was born March 20, 1930. She was one of eleven children of Clifford J. and Ruth Gaffney Collett of Wilkes-Barre. A member of the Class of 1948 of Elmer L. Meyers High School, she was very active in class reunions. Irene was generous and gave her time to a variety of organizations including the St. Vincent de Paul Kitchen and the kitchens at Central Catholic High School and Bishop O’Reilly High School and Nesbitt Memorial Hospital. She was a Cub Scout den mother and a member of the Red Hat Society. Her husband died in 1990. Four brothers, Jack, George, Clifford and Thomas Collett, and five sisters, Elizabeth Reese, Nancy Foy, Ruth Johnson, Jane Ford, and Charlotte Hogrebe also preceded her in death. She will be greatly missed by her three daughters, Joanne (Michael) Kosek of Forty Fort, Mary (Thomas) Brown of Lehman and Karen Molloy of Forty Fort; four sons, Joseph (Charlene) of Auburn, New York, Clifford (Colleen) of Wilkes-Barre, James (Carol) of Pringle and Michael Hannagan of Luzerne; twelve grandchildren: Molly and Timothy Molloy of Forty Fort, Thomas and Michael Brown of State College, Melissa Brown (Jason) Prokopchak of Plains, Sarah (Charles) Stickney of Waterford, Michigan, Colleen Hannagan of Pittsburgh, Ryan Hannagan of Hoboken, New Jersey, Vanessa Hannagan of Wilkes-Barre, Lauren and Christopher Hannagan of Pringle and Sarah Kosek of Forty Fort; two great-grandchildren, Charles and Grace Stickney of Waterford, Michigan; a brother, William Collett of Dallas; and many nieces and nephews. Irene’s entire family extends gratitude to the staff of Riverview Ridge and Riverstreet Manor for the kind, compassionate and loving care they shared with her throughout the past three years. Celebration of Irene’s Life will be held Saturday at 8:30 AM from McLaughlin’s – The Family Funeral Service, 142 South Washington Street in Wilkes-Barre with Funeral Mass at 9:30 in the Church of Saint Ignatius Loyola in Kingston. Interment will be in Saint Mary’s Cemetery in Hanover Township. Visitation will be held at McLaughlin’s on Friday from 5 to 8 PM. Memorial donations are preferred and may be made to the Saint Vincent de Paul Kitchen, 39 East Jackson Street, Wilkes-Barre, PA 18701. Permanent messages and memories can be shared with Irene’s family at www.celebrateherlife.com

Irene Rose Collett Hannagan, 83, was fond of telling everyone she met that she was “one of eleven and raised seven.” She died Tuesday at Riverstreet Manor in Wilkes-Barre. Irene married her high school sweetheart, James Vincent Hannagan and... View Obituary & Service Information

The family of Irene Collett Hannagan created this Life Tributes page to make it easy to share your memories.

Irene Rose Collett Hannagan, 83, was fond of telling everyone...