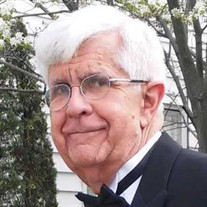 Hugh J. McGeehan, 70, passed away on Friday evening, January 10, 2020. Hugh was the son of the late James and Agnes Wasielewski McGeehan and grew up on Park Place in Kingston. The Park held a special place in his heart, and he continued to live there for sixty-six years until he became ill. He was educated in the Kingston School District, and was a member of the first graduating class of Wyoming Valley West in 1967 after the jointure of the West Side school districts. He went on to graduate from King’s College with a degree in business and was especially proud of being a King’s alumni. After graduation from King’s, Hugh joined the Air Force and served in Texas and at the missile silos in North Dakota. He told many stories of his time in service and often joked that his finger was a deadly weapon when he was on duty. Hugh was employed for many years by the Pennsylvania Department of Labor and Industry in Hazleton. Later, he transferred to the Career Link Office in Wilkes-Barre. Hugh was a member of the Parish of Saint Ignatius Loyola in Kingston. A passionate cook, Hugh loved to develop recipes for his “Cholesterol Café” and share the results with co-workers and friends. He was also the quintessential gadget man. He’d spend hours going through catalogs to find some new item for the kitchen, house, car, or as a gift. Hugh had a quick wit, always ready with a one-liner and expressed his humor many times with what he called “Two Beer Poetry”. He will be remembered especially for giving a funny wedding toast – with a piece of actual toast! Above all else, Hugh loved being a firefighter. As a teen, he became a volunteer firefighter with the Columbian Fire Co. in Kingston. He enjoyed serving in different capacities through the years, especially being a safety trainer, and continued to be involved until becoming ill. For the past year, Hugh was a resident at ManorCare in Kingston. Special thanks are extended to the nurses and aides for their care and kindness during his stay. Thanks are also extended to the staff of Hospice of the Sacred Heart for their additional care during his final days. Hugh had no remaining immediate family but will be missed by close friends, Karen Adams and Heather and Tom Canino, along with his fellow firefighters, neighbors, and friends. He was also an adopted grandpa to Nicholas, Jordan, and Bella Adams and enjoyed spending time with them at Santa breakfasts, Easter egg hunts and Halloween. He was known to carry a piece of wax paper to playgrounds for them to enjoy fast rides on the sliding boards and keeping a supply of freezy squeezies for summer visits. Celebration of Hugh’s Life will be held Wednesday, January 15, 2020 with Funeral Mass at 10:30 AM in the Church of Saint Ignatius Loyola, North Maple Avenue in Kingston. Interment will be in Saint John’s Cemetery in Dallas. Memorial donations may be made to the SPCA, or Kingston Fire Department Feed A Family Program. Memories and condolences may be shared with Hugh’s friends at www.celebratehislife.com

Hugh J. McGeehan, 70, passed away on Friday evening, January 10, 2020. Hugh was the son of the late James and Agnes Wasielewski McGeehan and grew up on Park Place in Kingston. The Park held a special place in his heart, and he continued to... View Obituary & Service Information

The family of Hugh J. McGeehan created this Life Tributes page to make it easy to share your memories.