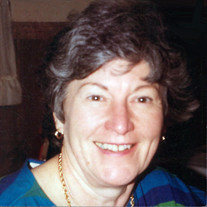 Hilda L. Healy, 90, a longtime resident of Wilkes-Barre and Forty Fort died September 20, 2018. Born November 29, 1927 in Wilkes-Barre she was a daughter of the late Charles and Mathilda Hausler. A 1945 graduate of Meyers High School, in 1948 she received her degree as a Registered Nurse from the Wilkes-Barre General Hospital School of Nursing. In 1949, she moved to New York City and was employed by Memorial Sloan-Kettering Cancer Center for several years before accepting positions in the medical departments of Banker's Trust Company and Standard Oil Company. She also served as a private duty nurse there. While living and working in New York City, Hilda met her husband, Neil, a resident of the city. Following their marriage on February 14, 1953, they lived in the city for several years before moving to Wilkes-Barre to raise their three sons, Charles, Neil and James. Hilda continued in her nursing practice on staff at Mercy Hospital in Wilkes-Barre and was employed in the Medical Department of Blue Cross of Northeastern Pennsylvania before retiring. Hilda was a volunteer for the American Red Cross Blood Drives for several years. She was active in Saint Therese's School Guild, and most recently volunteered at the Meadows Nursing Center in Dallas. She was a member of St. Elizabeth Ann Seton Parish and a longtime member of the Parish of Saint Therese in Wilkes-Barre. Hilda was a truly devoted mother and wife: her family always came first. Her husband, Cornelius (Neil) Healy, died July 30, 2014, and son, James David Healy, died January 11, 2002. Her daughter-in-law, Karen Healy, grandson, Ryan Healy, and sister, Margaret (Midge) Miller, also preceded her in death. She will be greatly missed by sons, Chuck Healy of Dallas and Neil Healy of Denver, Colorado; grandsons, Scott, Dalton, and Darian Healy; great-granddaughters, Charlize and Lilly Healy; several loving nieces and nephews, and close friends including her angel companion and caregiver, Erika. Celebration of Hilda's Life will be held Monday, October 8, 2018, with a Funeral Mass at 10 AM in the Church of Saint Elizabeth Ann Seton Parish in Swoyersville. Memorial donations are preferred and may be made to the American Heart Association, or the charity of your preference. Memories and condolences may be shared with Hilda's family at www.celebrateherlife.com

Hilda L. Healy, 90, a longtime resident of Wilkes-Barre and Forty Fort died September 20, 2018. Born November 29, 1927 in Wilkes-Barre she was a daughter of the late Charles and Mathilda Hausler. A 1945 graduate of Meyers High School, in 1948... View Obituary & Service Information

The family of Hilda L. Healy created this Life Tributes page to make it easy to share your memories.

Hilda L. Healy, 90, a longtime resident of Wilkes-Barre and Forty...