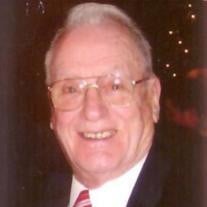 Herbert G. Godfrey, Sr., 95, of Mountain Top passed away Monday at Saint Therese Residence. Born February 28, 1916 in Williamsport he was a son of the late John and Edith Krim Godfrey. Mr. Godfrey was a graduate of Williamsport High School and Dickinson Junior College. A decorated Army veteran of World War II, he earned a field commission as a Second Lieutenant in the 100th Infantry Division, 397th Regiment and was later awarded a bronze star for his heroic action during the Battle of Heilbronn. After the war he came home to Wilkes-Barre and married his sweetheart, Marion Gilbert who preceded him in death in 2004. Herb worked for many years as a salesman and manager for Friedman Electric. Herb dedicated much of his life to the Wilkes-Barre Salvation Army serving as a board member, Past President and Christmas Kettle Chairman for thirty-five years. He was a member of the American Legion and a life member of VFW Post 283 in Kingston. He was Past President of the G.A.R. Booster Club, Wilkes-Barre Lions Club and Laurel Lakes Homeowner's Association and an active member of the Parish of Saint Jude. In addition to his parents and wife, he was preceded in death by a twin brother, Peter, brothers, Nate, Leo, Louis, Donald and John, and sisters, Patricia, Margaret and Edith. Herb was a loving father, grandfather and great-grandfather who always put his family first. He will be missed by his sons, Herb, Jr. “Chip” and his wife Claire of Kingston, Gil of West Nanticoke, Robert and his wife Kanapa of Studio City, California and Mark and his wife Brigid of Wilkes-Barre; grandchildren, Keith and his wife Maria Godfrey, Kathleen and her husband Jonathon Bilbow, Logan, Drew, Gray, Reese, Taylor, Kaelyn, Sarah Godfrey; great-grandchildren, Julia and Matthew Godfrey, and Olivia and Elizabeth Bilbow; sister-in-law, Carol Brady; brother-in-law, Robert and his wife Barbara Gilbert; sister-in-law, Margaret Godfrey; and numerous nieces and nephews. Celebration of Herb’s Life will be held Thursday at 11 AM from McLaughlin’s, 142 South Washington Street in Wilkes-Barre with Funeral Mass at 12 PM in the Church of Saint Jude. Interment will be in Holy Trinity Cemetery in Bear Creek. Visitation will be held at McLaughlin's on Wednesday from 5 to 8 PM. In lieu of flowers memorial donations may be made to Salvation Army, PO Box 1271, Wilkes-Barre, 18703-1271 Permanent messages and memories can be shared with Herb’s family at www.celebratehislife.com

Herbert G. Godfrey, Sr., 95, of Mountain Top passed away Monday at Saint Therese Residence. Born February 28, 1916 in Williamsport he was a son of the late John and Edith Krim Godfrey. Mr. Godfrey was a graduate of Williamsport High School... View Obituary & Service Information

The family of Herbert Godfrey created this Life Tributes page to make it easy to share your memories.