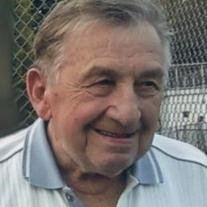 Henry M. Wasilewski, 86, of the Newtown section of Hanover Township died Thursday at Hospice Community Care. Born August 4, 1926 in Lipnicki, Poland he was a son of the late Jozef and Mary Madrak Wasielewski. Henry emigrated from Poland as a child and settled in Duryea with his family. He was a 1944 graduate of Duryea High School. After marrying his first wife, the late Shirley Krafjack Wasilewski, on June 25, 1949, they moved to Philadelphia and resided there for more than twenty years. A veteran of the Korean Conflict, Henry served with the Army from 1954 to 1956. Henry's career in the grocery business centered on his expertise in meat department operations. He headed the meat department of the Penn Fruit Company in Philadelphia for many years before moving to Clarks Summit in 1973 when he started managing the department for the Giant Markets chain. After fifteen years with Giant, he went out on his own, operating several business, including Valley Meat & Deli in Avoca, O Henry's Pub in Dalton and the Park Market in Nanticoke. He was last employed as a meat cutter at Price Chopper, retiring two years ago. Henry was a member of Our Lady of Fatima Parish and a communicant at the Church of Saint Mary of the Immaculate Conception. He was a dedicated fan of all Philadelphia sports teams and the Boston Red Sox. In addition to his first wife, his daughter, Joyce and brothers, Stanley and Joseph Skurzynski also preceded him in death. He will be greatly missed by his wife of twenty-one years, the former Barbara Ramage; daughters, Laura Mitteer of Factoryville and Linda and her husband Andrew Driesbaugh of Clarks Summit; step-son, Louis Smithonic of Mountain Top; grandchildren, Brian Mitteer, Shawn, Sarah and Tyler Driesbaugh; a sister, Helen Deluga of New Jersey; and his faithful companion, Sysqo. Celebration of Henry’s Life will be held Monday at 8:30 AM from McLaughlin's - The Family Funeral Service, 142 South Washington Street in Wilkes-Barre with Funeral Mass at 9:30 AM in the Church of Saint Mary of the Immaculate Conception. Interment will be in Saint Mary's Cemetery in Hanover Township. Visitation will be held at McLaughlin's on Sunday from 5 to 8 PM. Memorial donations are preferred and may be made to the charity of your preference. Permanent messages and memories can be shared with Henry’s family at www.celebratehislife.com

Henry M. Wasilewski, 86, of the Newtown section of Hanover Township died Thursday at Hospice Community Care. Born August 4, 1926 in Lipnicki, Poland he was a son of the late Jozef and Mary Madrak Wasielewski. Henry emigrated from Poland as... View Obituary & Service Information

The family of Henry Wasilewski created this Life Tributes page to make it easy to share your memories.

Henry M. Wasilewski, 86, of the Newtown section of Hanover Township...