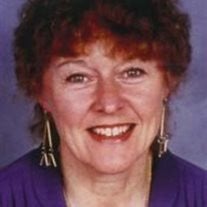 Helen Marie Rutledge went to be with her Lord on January 19, 2014. She was born February 7, 1932, in West Pittston, Pennsylvania, daughter of George J. and Jennie M. Rutledge. She attended Thomas Jefferson Nursing School in Philadelphia and received her Master’s in nursing at Catholic University in Washington, D.C. She began her nursing career in the Army in 1966, was stationed in Europe, and returned to San Francisco where she retired as a Major in 1981. She was a nursing instructor at the University of California, San Francisco, in the nurse practitioner program. She then began her second career in real estate with Coldwell Banker. In addition, she was a world traveler who shared her passion for life and her gift of giving to others with people all around the world and here at home. Helen was active as a volunteer in many local community activities and everywhere that Helen went, joy and love did follow. In her later years what brought her fulfillment were her volunteer activities, her welcoming home, her dear dog, Holly, and her family and friends. She is preceded in death by her four siblings, Jane, George, Bill and Jim, and a nephew, Paul, and survived by five nieces and nephews. She will be missed greatly by a host of friends and family and her dear childhood friend, Esther. A viewing will be held at Adobe Creek Funeral Home in Petaluma on Thursday, Jan. 23, at 4:00 p.m. A Funeral Mass will be held at Our Lady of Mount Carmel church in Mill Valley on Friday, Jan. 24, at 10:00 a.m. with a reception following at The Outdoor Art Club in Mill Valley. In lieu of flowers, memorial donations may be made to the Mudbath Fund for MS in care of Jackie Bacon, 1040 Cresta Way, #16, San Rafael, California, 94903.

Helen Marie Rutledge went to be with her Lord on January 19, 2014. She was born February 7, 1932, in West Pittston, Pennsylvania, daughter of George J. and Jennie M. Rutledge. She attended Thomas Jefferson Nursing School in Philadelphia and... View Obituary & Service Information

The family of Helen Marie Rutledge created this Life Tributes page to make it easy to share your memories.

Helen Marie Rutledge went to be with her Lord on January 19,...