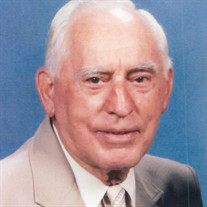 Harry M. Jones, 97, of Edwardsville and a longtime resident of Regent Street in Wilkes-Barre died Monday at Celtic Hospice. Born March 12, 1917 in Wilkes-Barre he was a son of the late Harry and Dorothy Higgins Jones. A graduate of Saint Mary's High School, Harry was an Army veteran of World War II and served honorably in the Phillipines. Harry worked for the Central Railroad of New Jersey for several years before accepting a milk delivery route for Gorman's Dairy from which he retired after twenty-five years. A member of the Parish of Saint John the Baptist in Larksville, Harry was a former member of the Church of Saint Aloysius where he was a member of the Holy Name Society and served as an usher for thirty-five years. His wife, Margaret Clemm Jones died August 3, 2004. Brothers, Frank and Bill Jones, and sisters, Margaret Cummings, Dorothy Dillon, Mary Lambert and Catherine Tomascik also preceded him in death. He will be greatly missed by his children, Frank and his wife Patricia Jones of Jacksonville, Florida, Kathy and her husband Joseph Maciejczyk of Edwardsville, and Karen and her husband Stephen Washicosky of Larksville; grandchildren, Michele and her husband Michael Phelps, Brian and his wife Kristin Jones, Chris and his wife Carrie Lynn Maciejczyk, Kerry Lynn and her husband Marc Rosario, Suzanne and her husband Jim Gill, Jeffrey and his wife Alma Maciejczyk, Lisa and her husband Jason Innamorati, Stephen and his wife Michelle Washicosky and Kevin Washicosky; great-grandchildren, Alexa and Makayla Rosario, Christopher and Matthew Maciejczyk, Dominic and Nicholas Innamorati, Aiden Maciejczyk, Nicholas and Taryn Gustafson, and Kyle, Christopher and Quinn Jones; brother, Joseph and his wife Irene Jones of Kingston; sister, Helen Menechini of New Jersey; nieces, nephews, other family and friends. Celebration of Harry’s Life will be held Friday at 10 AM from McLaughlin’s, 142 South Washington Street in Wilkes-Barre with Funeral Mass at 11 AM in the Church of Saint John the Baptist. Entombment will be in Saint Mary's Mausoleum. Visitation will be held at McLaughlin's on Thursday from 4 to 7 PM. Permanent messages and memories can be shared with Harry’s family at www.lifecelebrations.com

Harry M. Jones, 97, of Edwardsville and a longtime resident of Regent Street in Wilkes-Barre died Monday at Celtic Hospice. Born March 12, 1917 in Wilkes-Barre he was a son of the late Harry and Dorothy Higgins Jones. A graduate of Saint Mary's... View Obituary & Service Information

The family of Harry M. Jones created this Life Tributes page to make it easy to share your memories.

Harry M. Jones, 97, of Edwardsville and a longtime resident of...