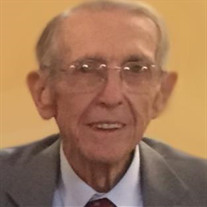 Gilbert “Knox” Cooney, 91, passed away peacefully at his home on Friday, January 29, 2016 surrounded by his loving family. Born February 1, 1924 in Ashley, he was the son of the late James Munley Cooney and Harriet Casey Cooney. Gil attended Ashley High School. In 1943, he entered the US Army where he served as a combat medic. He received four Bronze Medals for his bravery in the Asiatic Pacific Theater of World War. Gil returned home to Ashley, attended night school while working in a shoe factory. It was there that he got his start to serve and represent the shoe factory workers in Wyoming Valley. Later he served as secretary-treasurer of the Boot and Shoe Workers of Local 149 AFL. In 1955, Knox was elected to the AFL-CIO as a full time agent for the unions at headquarters in downtown Wilkes-Barre. His love for his community and passion was evidenced by his accomplishments. Gil along with other union leaders helped implement a program for intellectually disabled people. As a result, he was presented with an award from the Luzerne County Association for Retardation in 1962. His passions did not go unnoticed. In 1986, he received “The Spirit of Unionism Honor” award from UFCS Local 1357. On February 1, 1986 he retired after serving 39 years as union officer. He served on the board of The United Way, the United Rehabilitation Board and volunteered with numerous organizations. In 2015, he was given the Mother Jones Award for his dedication for helping the many men and women in Wyoming Valley. Most importantly, he was a loving, dedicated husband to his wife Geraldine with whom he shared sixty-seven years. He was a great father to his children; Jim and Gildine. He treasured his time spent and was proud of his grandchildren; Brett, Jimmy, Tim and Jennifer and most recently his five great grandchildren; James, Kate, Colin, Jack and Declan. Gil told his family that he was blessed having lived a full life with a wonderful family. He was preceded in death by his brothers, James, Patrick, and Jerome, and his sister, Harriet Kowak. Gil will be deeply missed by his loving wife Geraldine Gurgick Cooney, son Jim and wife Patricia, daughter Gildine and husband Richard Musial; granddaughter Jennifer, grandson Brett, grandson Jim and wife Maureen and grandson Tim and his wife Colleen. He is also survived by many nieces and nephews, great nieces and great nephews, cousins and numerous others whose lives he helped shape. The family extends special thanks for the loving care Gil received from his special team of “Visiting Angels”, Erwine Hospice and Dr. Michelle Catena and staff. Celebration of Gil’s life will begin Tuesday with visitation from 5 to 8 PM at McLaughlin’s, 142 South Washington Street in Wilkes-Barre and continued there Wednesday with gathering at 9 AM followed by a Funeral Mass at 10 AM in the Church of Saint Leo the Great in Ashley. Interment will be in St. Mary's Cemetery. Memorial donations are preferred and may be made to a charity of your preference. Memories and condolences may be shared with Gil’s family at www.lifecelebrations.com

Gilbert &#8220;Knox&#8221; Cooney, 91, passed away peacefully at his home on Friday, January 29, 2016 surrounded by his loving family. Born February 1, 1924 in Ashley, he was the son of the late James Munley Cooney and Harriet Casey Cooney.... View Obituary & Service Information

The family of Gilbert 'Knox' Cooney created this Life Tributes page to make it easy to share your memories.

Gilbert “Knox” Cooney, 91, passed away peacefully at his home...