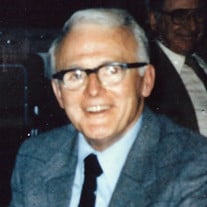 George J. O'Donnell, M.D., long-time pediatrician of Wilkes-Barre died March 12, 2009 at Wilkes-Barre General Hospital. Born July 10, 1924 in Wilkes-Barre a son of the late Dr. and Mrs. Francis T. O'Donnell, Dr. O'Donnell graduated from St. Mary's High School in 1942, attended University of Scranton and received his Doctorate in Medicine from Thomas Jefferson Medical College in Philadelphia. He served his residency in Pediatrics at Children's Hospital in Philadelphia and interned at Wilkes-Barre General Hospital. Board Certified in Pediatrics, Dr. O'Donnell operated a private practice in Wilkes-Barre for more than forty years and was on staff at Mercy Hospital in Wilkes-Barre. He was a member of Pennsylvania Medical Society for more than fifty years. He was also a member of the Northeastern Pennsylvania Pediatric Society, the National Pediatric Society and the Irish-American Pediatrics Society. Dr. O'Donnell served as a Lieutenant in the United States Navy during the Korean Conflict. Dr. O'Donnell brought his medical expertise to the schools and community serving as team physician and school physician for St. Mary's High School. He was also Chairman of the Board of Directors of the Catholic Youth Center (CYC) in Wilkes-Barre for two years. A great sports enthusiast, Dr. O'Donnell enjoyed playing, watching and coaching a variety of sports. He coached basketball at the Catholic Youth Center in Wilkes-Barre. In the 1970s, he coached the Wizards, a post-season All-Star Basketball team. He played tennis and golf for many years. He was a member of Wyoming Valley Country Club for more than fifty years where he scored a hole-in-one twice. He served as WVCC's Golf Chairman from 1962-1963. Dr. O'Donnell was an active member of St. Mary of the Immaculate Conception Parish in Wilkes-Barre for over sixty years, where he served as a lector and as a member of the Pastoral Council. In June 2008, Dr. O'Donnell and his high school sweetheart Nancy Fraley celebrated sixty years of marriage. He was preceded in death by brothers Robert, Francis and James. In addition to his wife, Dr. O'Donnell is survived by brother Raymond of Holland, Pennsylvania, son Dr. George J. O'Donnell, Jr. of Portand, Maine; daughter Nancy Habbel and her husband Michael of Martinsville, Indiana; son Christopher J. O'Donnell, Esq., and his wife Shivaun of Dallas; grandchildren Emily, Michael, Katherine, Anne Elizabeth and Evan, as well as many nieces and nephews. Funeral will be held Tuesday at 10 a.m. from McLaughlin Family Funeral Service, 142 S. Washington St., Wilkes-Barre with Funeral Mass at 10:30 a.m. in St. Mary of the Immaculate Conception Church. Interment will be in St. Mary's Cemetery in Hanover Township. Friends may call Monday from 4 to 8 p.m. In lieu of flowers, donations can be made to St. Mary's Parish, P.O. Box 348, Wilkes Barre, PA 18703-0348

The family of George J. O'Donnell MD created this Life Tributes page to make it easy to share your memories.