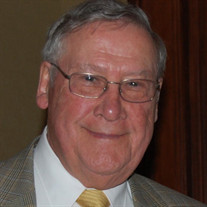 George A. Spohrer, 89, of Dallas, formerly of Wilkes-Barre and Pittston died Wednesday, July 15, 2015. Born June 30, 1926 in Pittston he was a son of the late Edward A. and Mary Baker Spohrer. George was a graduate of St. John’s High School, Pittston, Class of 1944. After his graduation from high school, George entered the military service proudly serving in the U.S. Navy during World War II in the Japanese Theatre aboard the Transport Ship U.S.S. Harris as a radio operator where he mastered the art of two-fingered typing. Following his military service, he attended King’s College, Wilkes-Barre and received his degree from the Catholic University of America in Washington, DC. He received his law degree from the University of Pennsylvania, following which he returned to Pittston to begin his legal career with the firm of White, Rowlands & Hourigan. He was a founding member of the firm of Hourigan, Kluger & Spohrer where he was instrumental in building the firm’s legal defense malpractice unit. While maintaining his private practice, George was appointed a Workman’s Compensation Referee by Governor George Leader and assisted in the creation of the Federal Mediation Program of the Federal Court for the Middle District of Pennsylvania. He was a member of the Wilkes-Barre Law & Library Association, the Pennsylvania Bar Association, the American Bar Association, the Wyoming Valley Country Club and the Westmoreland Club. Following his retirement from the active practice of law in 1996, he became Of Counsel to his son Jonathan’s law firm in Kingston until the time of his death. George enjoyed a life-long passion for steam engine railroading which led to his formation of the Marney Railroad Corporation in 1962, creating a live steam engine railroad amusement ride in Plains Township. This was followed later in his life by his restoration of a smaller steam engine which he ran for many years at local charity events throughout Wyoming Valley. A man of deep Catholic faith, he was a member of the Parish of Saint Mary of the Immaculate Conception in Wilkes-Barre and the Parish of Saint Therese in Shavertown, serving on many of their societies and councils. He proudly served on the Board of Directors of Assumption College for Sisters, served by the Sisters of Christian Charity located in Mendham, NJ. George married the former Isabelle McGuire in 1953 and together they raised their six children, Marian, George, Carolyn, Virginia, Jonathan, and Pauline over the course of their 47 year marriage before her untimely death in 2001. In addition to his wife, he was preceded in death by his parents; brother, Edward and his wife Lala Spohrer; sister, Dorothy and her husband Tom Moughan; twin sister, Miriam and her husband Tom Loftus; and his son-in-law, Derek Smith. George will be greatly missed by his children, Marian Smith and her daughter, Jocelyn Smith, Rowlands Castle, England; George A. Spohrer, Jr. and his wife Joan of South Bend, Indiana and their children, Rebecca and her husband Matthew Freeman, Kelly Spohrer, Katherine Spohrer, and George A. Spohrer, III; Carolyn Spohrer of Glen Allen, Virginia; Virginia Wright of Oakmont and her sons Christopher, Andrew and Jonathan; Jonathan Spohrer of Shavertown; and Pauline and her husband Daniel Bliss of Madison, New Jersey and their daughters, Emily and Mary Margaret; his very special niece, Sister Mary Edward Spohrer, Sisters of Christian Charity at Mallinckrodt Convent, Mendham, New Jersey; other family and friends. Celebration of George’s Life will begin Sunday, July 19, 2015 with visitation from 3 to 6 PM at McLaughlin’s, 142 S. Washington Street, Wilkes-Barre. A Funeral Mass will be celebrated by Monsignor John Jordan and Father James Paisley in the Church of Saint Mary of the Immaculate Conception, Wilkes-Barre on Monday, July 20, 2015 at 10 AM. Interment will be in Saint Mary’s Cemetery in Hanover Township. In lieu of flowers, memorial contributions can be made to the Care and Concern Free Health Clinic, 37 William Street, Pittston, PA. Memories and condolences may be shared with George’s family at www.lifecelebrations.com

The family of George A. Spohrer Esq. created this Life Tributes page to make it easy to share your memories.

George A. Spohrer, 89, of Dallas, formerly of Wilkes-Barre and...