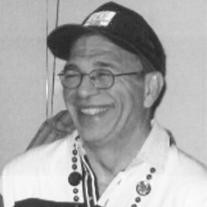 Frank John Rodella, 64, of Wilkes-Barre, passed away unexpectedly at home on May 6th, 2011. He was born May 9th, 1947 in Hoboken, New Jersey to the late Hugo and Lillian Rodella. He attended Bergenfield High School where he was known as "Roach," was on the varsity wrestling team and won the title of Senior District Champion in 1965. Frank attended Wilkes College where he graduated with a degree in History in 1970. He was married to his wife Karen in 1975. Frank continued his education at Marywood College and graduated with a Masters in Early Childhood Education in 1979. He was a member of St. Nicholas Church where he was active in many committees. Frank was a teacher for 20 years in the Western Wayne School District, and was currently employed by the Men’s Wearhouse in Pittston as a dry-cleaner. Through the activities of his children, Frank became a supporter of the arts in his community where he was known affectionately among friends as “Papa Ro.” He assisted with ticket sales for Gaslight Theatre, and attended productions at The Little Theatre of Wilkes-Barre, KISS Theatre, and King’s Theatre. He was a strong supporter of his son’s band, Paulsko, as well. Frank was a famous dancer at weddings, known for his enthusiastic spins across the floor with family and friends. He loved playing pinochle with his wife, and spent many evenings out with her and their friends. Frank considered himself an amateur comedian, joking with anyone he met, and he had a keen ability for finding humor in any situation. He was the strongest man in the world. Frank is survived by his wife of 35 years, Karen (Lilly) Rodella, his daughters Anne and Jane, his son, Paul, his sister, Judy Wheeler, of Hampton, New Jersey, his brother, Peter Rodella, of Del Ray, Florida, and their families. Celebration of Frank’s Life will be held Monday at 8:45 AM from McLaughlin’s, 142 South Washington Street in Wilkes-Barre with Funeral Mass at 9:30 AM in the Church of Saint Nicholas. Interment will be in Saint Nicholas Cemetery in Shavertown. Visitation will be held at McLaughlin’s on Sunday from 4 to 7 PM. Memorial donations are preferred and may be made to Saint Nicholas Church Building Fund, 226 South Washington Street, Wilkes-Barre, 18701-2897 Permanent messages and memories may be shared with Frank’s family at www.celebratehislife.com

Frank John Rodella, 64, of Wilkes-Barre, passed away unexpectedly at home on May 6th, 2011. He was born May 9th, 1947 in Hoboken, New Jersey to the late Hugo and Lillian Rodella. He attended Bergenfield High School where he was known as "Roach,"... View Obituary & Service Information

The family of Frank Rodella created this Life Tributes page to make it easy to share your memories.