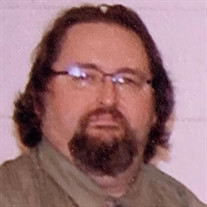 Frank J. Nutaitis, 53, of Wilkes-Barre, passed away on September 21, 2020 after a brief illness. Born May 22, 1967 he was a son of the late Charles J. and Loretta Galicki Nutaitis. Frank was raised in Glen Lyon and graduated from Greater Nanticoke Area High School in 1985. Frank earned a Bachelors Degree in English and Education from Wilkes University and began a fulfilling career as a middle school and high school English teacher. Frank was passionate about correct grammar and loved literature, especially the works of William Shakespeare, Edgar Allan Poe, and Charlotte Bronte. Frank was a gifted writer of short stories, two novels, and more than fifteen plays. In addition to writing and directing the plays for his Middle School Drama Club, he designed and assisted in constructing their sets and props. Frank enjoyed teaching these young actors and was very proud of their accomplishments. Frank even took to the stage along with the students a few times, and all had fun. His portrayal of Ebenezer Scrooge, a role he always wanted to bring to the stage personally, was perhaps his most remarkable performance. Frank loved sports and music. In his youth he played baseball, basketball, and golf. He was a rabid New York Yankees fan, but nothing could top his Beloved Buffalo Bills. Frank and his family traveled to Orchard Park to see the Bills, and his enthusiasm made everyone with him a Bills fan. Frank was a gifted musician who played guitar, keyboard, and trumpet; writing and recording his original music in his home studio. He always wanted to be the 'Next David Bowie.' Frank will be greatly missed by the greatest joy of his life, his niece Loretta, who was more like a daughter to him. She was his Pal, his 'Sugar Plum' and 'Boo Boo to his Yogi Bear.' Also surviving are his sister, Corinne, with whom he resided; brother, Charles and his wife Judy of Pen Argyl; nephews, Charles and Carl Nutaitis, who laughed at all of Uncle Frankie's jokes and of whom Frank was incredibly proud. Frank's family is grateful for the excellent medical care and support of Dr. Patrick Kerrigan. Celebration of Frank's Life will begin Sunday, September 27th with visitation from 4 to 7 PM at McLaughlin's, 142 South Washington Street in Wilkes-Barre and continue there on Monday, September 28th with gathering at 9 AM followed by a Funeral Mass at 10 AM in the Church of Saint Nicholas. Mask and social distancing protocols will be in effect. Memorial donations are preferred and may be made to the American Blood Clot Association. Memories and condolences may be shared with Frank's family at www.mjmclaughlin.com

Frank J. Nutaitis, 53, of Wilkes-Barre, passed away on September 21, 2020 after a brief illness. Born May 22, 1967 he was a son of the late Charles J. and Loretta Galicki Nutaitis. Frank was raised in Glen Lyon and graduated from Greater Nanticoke... View Obituary & Service Information

The family of Frank J. Nutaitis created this Life Tributes page to make it easy to share your memories.

Frank J. Nutaitis, 53, of Wilkes-Barre, passed away on September...