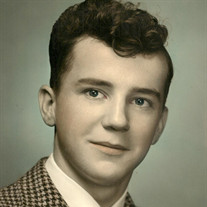 Frank J. McHenry, 90, passed away peacefully at Saint Luke's Villa on January 25, 2018. Born September 10, 1927 in Wilkes-Barre, a son of the late Frank D. and Ruth Conners McHenry, Frank was a 1946 graduate of Kingston High School. Frank was a member of the Pipe Fitters and Plumbers Union, now the United Association Local 524 for many years. In addition to his work in the field, he taught his trade through night school at Meyers High School for many years. He was a long-time member of the Parish of Saint Therese in Wilkes-Barre. An outdoor enthusiast, Frank enjoyed fishing, hunting, camping, hiking and playing golf. He most enjoyed spending time with his children, grandchildren and great-grandchildren. His wife of fifty-eight years, Kathleen Maley McHenry, died September 30, 2017. Sisters, Ruth Berstoski, Mildred Styklunas and Doris McCloskey Banis, and a brother, Robert McHenry, also preceded him in death. Frank will be greatly missed by his children; Patty McNulty and Carol and her husband Robert Suchoski, Frank and his wife Suzanne, Paul and his wife Rhonda, and Matthew and his wife Kim; grandchildren, Kelly Monka, Kristen and Katie McNulty, Julie and Sarah Suchoski, Frankie and Rebecca McHenry, Blake Rankin, Luke and Emily McHenry, Lauren and Caitlyn McHenry; great-grandchildren, Aubrey and Frankie McHenry, Fiona Rose Dotzel and Quinn Kathleen Monka; nieces, nephews, other family and friends. Frank's entire family is grateful for the kindness and wonderful care he received from the staff at Saint Luke's Villa and the Outpatient Infusion Department of Wilkes-Barre General Hospital. Celebration of Frank's Life will be held Monday with visitation beginning at 9 AM in the Chapel at Saint Luke's Villa, 80 East Northampton Street in Wilkes-Barre. A Funeral Mass will be celebrated at 10 AM. Interment will be in Saint Mary's Cemetery. Memorial donations are preferred and may be made to the Stanley Cooper Sr. Chapter 251, Trout Unlimited, PO Box 1135, Kingston, PA 18704 Memories and condolences may be shared with Frank's family at www.celebratehislife.com

The family of Frank J. McHenry created this Life Tributes page to make it easy to share your memories.