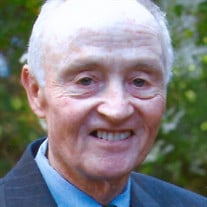 Frank Charles Hourigan, Jr. died peacefully on February 1, 2015. He was the oldest child of Frank and Jayne Hourigan, who preceded him in death along with his brothers, Joseph and Thomas, as well as his sisters, Mary and Sarah. Frank graduated from Central Catholic High School and earned a bachelor's degree from King's College where he was the team captain of the varsity tennis team which won a league championship with a perfect 12-0 record. He was a lifelong resident of Glen Summit, where he loved to play tennis, hunt, and enjoy the outdoors. This was also the location of his first business, Hourigan Brothers Wire Rope, which he operated along with his brothers. The business was sold to American Lifting Products, a national conglomerate, in 1992. He then was employed as a sales manager for Lehigh Coal & Navigation. He later founded Hourigan Real Estate, a residential brokerage firm which grew to employ over 20 people. Frank was a lover of music and a talented drummer who played by ear without using notes. He founded and managed a rock & roll band, the RPM Old Stars, for over 20 years. The band played hundreds of local weddings and concerts, including large annual summer events at Hanson's Ballroom at Harvey's Lake which were attended by thousands of fans. He served in the United States Coast Guard and enjoyed spending family summer vacations at the Jersey shore. He also was a member of the Knights of Columbus. Frank is survived by Anne, his spouse of 41 years, and his four children: Frank, Maureen, Bob and Michael. He also is survived by 6 grandchildren: Emma, Matthew, Charlie, Teddy, Christopher and Jack. Frank was widely known throughout the community as a kind, compassionate man with an incredible sense of humor. He valued his Roman Catholic faith and his family above all else, and will be sorely missed by his family as well as countless others in the community. Funeral Mass will be celebrated Thursday at 10 AM in the Church of Saint Jude in Mountain Top. Interment will be in Saint Mary’s Cemetery. Visitation will be held Wednesday from 3 to 6 PM at McLaughlin’s, 142 South Washington Street in Wilkes-Barre. In lieu of flowers, memorial donations may be made to St. Jude Parish, 420 South Mountain Blvd., Mountain Top PA 18707 (www.stjc.org) to support the capital campaign to build a new church. Memories and condolences may be shared with Frank’s family at www.lifecelebrations.com

Frank Charles Hourigan, Jr. died peacefully on February 1, 2015. He was the oldest child of Frank and Jayne Hourigan, who preceded him in death along with his brothers, Joseph and Thomas, as well as his sisters, Mary and Sarah. Frank graduated... View Obituary & Service Information

The family of Frank C. Hourigan Jr. created this Life Tributes page to make it easy to share your memories.