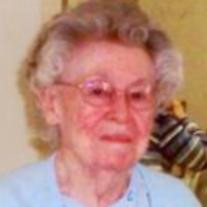 Florence Carr Rollman, 97, formerly of Washington Square Apartments in Wilkes-Barre died Sunday at Little Flower Manor. Born September 1, 1914 in Wilkes-Barre she was a daughter of the late Peter and Mary Burke Carr. Florence attended Saint Mary's High School and was employed by the former Wilkes-Barre Lace Mill for several years prior to marriage. Mrs. Rollman dedicated most of her life to caring for her family. Florence was a member of the Parish of Saint Nicholas and was active in the resident's club of Washington Square Apartments where she had resided for thirty-one years. Her husband, John C. Rollman died October 17, 1986. Sisters, Anna Peranto and Emily Trevethan, and brothers, James, John, George and Harry Carr also preceded her in death. She will be missed by her sons, John J. and his wife Jean Rollman of Wilkes-Barre, James F. and his wife Dolores Rollman of Barnegat, New Jersey and William P. and his wife Gail Rollman of Williamsport; granddaughters, Shannon Reilly, Tiffany Rollman, Elizabeth Davis and Melissa Caroccia; great-grandchildren, Morgan, Victoria, Aiden and Maya; nieces, nephews, cousins and friends. Celebration of Florence’s Life will be held Saturday at 8:30 AM from McLaughlin's - The Family Funeral Service, 142 South Washington Street in Wilkes-Barre with Funeral Mass at 9:30 AM in the Church of Saint Nicholas. Interment will be in Saint Mary's Cemetery in Hanover Township. Visitation will be held at McLaughlin's on Friday from 4 to 6 PM. In lieu of flowers, memorial donations may be made to Parish of Saint Nicholas, 226 South Washington Street, Wilkes-Barre, 18701-2897. Permanent messages and memories can be shared with Florence’s family at www.celebrateherlife.com

The family of Florence Rollman created this Life Tributes page to make it easy to share your memories.