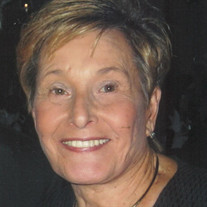 Florence Kiwak Reilly, 85, died peacefully at her home in Wyoming on January 12, 2017, surrounded by her loving family. ‘Flossie’ grew up in Swoyersville, the 10th of 11 children born to the late Mary (Hahn) and Louis Kiwak. In 1951, she married ‘the boy with the curly hair’ from down the street, Charles M. Reilly. She travelled by ship to Germany to be with ‘Charlie’ while he completed his military service; they lived briefly in Philadelphia before returning to their roots in the Wyoming Valley. A consummate wife and homemaker, Flossie supported Charlie throughout their life together, from when he attended college at Drexel, through to helping him open their own business in 1969, Reilly Plating Co., while raising five children and honing her fantastic cooking and baking skills. Well known for her cinnamon buns, pies, cakes, jams, canned goods and spaghetti sauce, Flossie was a generous spirit who cared for others through her creative and thoughtful homemade gifts. An active member of the community, Flossie served as a Cub Scout den mother, as a “Pink Lady” at the Wilkes-Barre General Hospital and as a member of its Auxiliary board. She was also a religious instructor at her church and a Eucharistic Minister for the hospital, among other volunteer roles. She and Charlie traveled extensively, visiting many countries on almost every continent. Most memorably, she rode a camel to the pyramids in Egypt, walked in the footsteps of Jesus in Israel, kissed the Blarney Stone in Ireland, flew on the Concorde and sailed on the QEII, united with family in Poland, and helped Charlie track down ancestors in Ireland. Flossie is survived by her loving husband and the beautiful family they created: Ann and Michael Ferraro, Bud and Linda Reilly, Carol and Jack Gleason, Joe Reilly, and Susan and Jason Salgado; as well as nine grandchildren: Michael and Danielle (DiMaggio) Ferraro, Jeff and Lauren (Russo) Ferraro; Kelly Reilly, Charlie Reilly, Elizabeth Gleason, Caroline Gleason, Joey Reilly, Jimmy Reilly, and Grace Salgado; two great-grandchildren: Jackson and Ryan Ferraro, with a third on the way. Flossie also leaves behind her younger sister, Rosalie Parsons and her sister-in-law Helen Kiwak, and many nieces and nephews. The family offers special thanks to Dr. Michael Rupp, and Joyce, Sue and Angel from Erwine Hospice for the wonderful care they provided. Flossie touched the lives of so many. For her children and husband of 65 years, she will be missed daily. In lieu of flowers, we ask that you support the charitable organization that means the most to you, through a monetary gift or through your own service, remembering Flossie’s spirit of generosity to others in your gift. Celebration of Flossie’s Life will begin Friday with visitation from 4 to 8 PM in the Church of the Holy Family, 574 Bennett Street in Luzerne and continue there Saturday with visitation beginning at 9 AM followed by a Funeral Mass celebrated by Monsignor John Sempa at 10 AM. Interment will be in Saint Mary’s Cemetery in Hanover Township. Arrangements by McLaughlin’s. Memories and condolences may be shared with Flossie’s family at www.lifecelebrations.com

Florence Kiwak Reilly, 85, died peacefully at her home in Wyoming on January 12, 2017, surrounded by her loving family. &#8216;Flossie&#8217; grew up in Swoyersville, the 10th of 11 children born to the late Mary (Hahn) and Louis Kiwak. In... View Obituary & Service Information

The family of Florence Kiwak Reilly created this Life Tributes page to make it easy to share your memories.

Florence Kiwak Reilly, 85, died peacefully at her home in Wyoming...