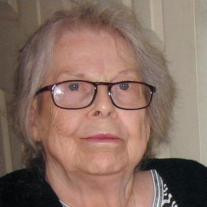 Eyleen Elsie Hoerl Kenney, 91, a former sixty-year resident of Wilkes-Barre passed on in peace at the home of her daughter in Okeechobee, Florida on Friday. Born February 20, 1920 in Cumberland, Wisconsin she was a daughter of the late Martin and Elsie Berglund Hoerl. Eyleen was a 1938 graduate of Cumberland Area Schools and continued her education at the University of Wisconsin. During World War II Eyleen moved to Washington, D.C. where she worked for the Director of Operations for Navy Demobilization. There she met, Bernard Kenney, US Marine, and they married on October 31, 1945. Eyleen lived in Wilkes-Barre, where she raised her three children, until she moved to Florida in 2006. She was an enthusiastic gardener, cook and baker, and remained involved with the Riverside Park Association and democratic politics and elections throughout Luzerne County. Her husband died September 23, 1982. Sons, Bernard James and Barry Martin Kenney also preceded her in death. She will be missed by her daughter, Patricia Jane of Okeechobee, Florida; daughter-in-law, Nancy, grandson, Brian and great-granddaughter, Stephanie of Seattle, Washington; nieces, Myrtle Nagle, Helen Williams, Kathy Jesse and Bonnie Bents of Cumberland, Wisconsin; nephew, Peter and his wife Nancy Kenney of Palm Harbor, Florida; numerous great-nieces and –nephews; her extended family, Frank and Carolyn Kowalski and Sylvia and Lou Vento; and her dearest friends, Thelma Phoenix and Barbara and Donald Foley. Celebration of Eyleen’s Life will be led by Reverend Barbara L. Pease on Thursday at 11 AM at McLaughlin’s, 142 South Washington Street in Wilkes-Barre. Interment will be in Saint Mary's Cemetery in Hanover Township. Visitation will be held at McLaughlin's on Wednesday from 2 to 4 and 6 to 8 PM. Memorial donations are preferred and may be made to Thomas St. Angelo Public Library, PO Box 97, Cumberland, WI 54829-0097 Permanent messages and memories can be shared with Eyleen’s family at www.celebrateherlife.com

Eyleen Elsie Hoerl Kenney, 91, a former sixty-year resident of Wilkes-Barre passed on in peace at the home of her daughter in Okeechobee, Florida on Friday. Born February 20, 1920 in Cumberland, Wisconsin she was a daughter of the late Martin... View Obituary & Service Information

The family of Eyleen Kenney created this Life Tributes page to make it easy to share your memories.