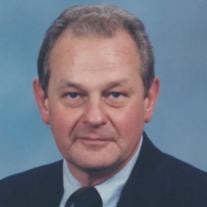 Emil Joseph Janc, 76, of Bear Creek Village died Tuesday at his home in the presence of his family. Born June 10, 1934 in Chicago, Illinois he was a son of the late Emil and Cornelia Blommaert Janc. A graduate of Bishop Noll High School in Hammond, Indiana, Emil earned his bachelor's degree from St. Joseph's College in Rensselaer, Indiana in 1958. Emil retired in 2000 after a forty year career as district manager for Caterpillar - CMI Corporation of Oklahoma City. Mr. Janc was a member of the Parish of Saint Elizabeth where he served as a lector. Emil was instrumental in the formation of Bear Creek Village Borough, and was a member of its original Council and served as Roadmaster until his recent retirement. He formerly served six years as president of the Bear Creek Association and was the longest term member of the Bear Creek - Buck Township Lions Club. He took great interest in carving totem poles, and placement of the Christmas tree on the dam at Bear Creek Village. A Fourth Degree Member of Our Lady of Czestochowa Assembly 1928 of Luzerne, Emil was a member of the Knights of Columbus Council 10571 in Bear Creek and was a Past Grand Knight of Council 1542 in La Porte, Indiana. Emil was an enthusiastic Notre Dame fan who enjoyed hunting, fishing and travelling the world with his wife. A brother, Joel Janc preceded him in death. Surviving are his wife of fifty-three years, the former Charlotte A. Fencl; children, Therese and her husband Robert G. Smith of Mountain Top, Joseph E. Janc, Esq. of Bear Creek Township and Michael F. Janc of Bear Creek Township; grandchildren, Aubrey and Ethan Smith; a brother, Albert Janc of San Diego, California; and several nieces and nephews. Emil’s family extends their deepest gratitude to the staff members of Hospice Community Care who graciously cared for him. Emil’s Life will be Celebrated in a Funeral Mass on Friday at 10 AM in the Church of Saint Elizabeth. Interment will be in Holy Trinity Cemetery in Bear Creek. Visitation will be held at McLaughlin’s Family Funeral Service, 142 South Washington Street in Wilkes-Barre on Thursday from 5 to 8 PM. Memorial donations are preferred and may be made to Parish of Saint Elizabeth, PO Box 25, Bear Creek, 18602

Emil Joseph Janc, 76, of Bear Creek Village died Tuesday at his home in the presence of his family. Born June 10, 1934 in Chicago, Illinois he was a son of the late Emil and Cornelia Blommaert Janc. A graduate of Bishop Noll High School... View Obituary & Service Information

The family of Emil Janc created this Life Tributes page to make it easy to share your memories.