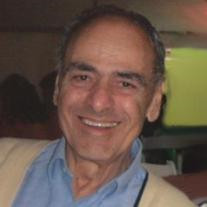 Emil A. Goryeb of Kingston passed away on Wednesday, May 4th at Wilkes-Barre General Hospital following complications from an illness. He is survived by his wife, Dorene Schmid Goryeb. Together, they celebrated their 57th wedding anniversary on February 14th. Born in Park Slope, Brooklyn, New York, he was the son of the late Wadia and Mountaha Khazhal Goryeb. Emil attended Peekskill Military Academy and served in the United States Army. He was stationed in Heidelberg, Germany during the Berlin Crisis. Early in his professional career he created Babbage Systems, New York City, named for Charles Babbage, who originated the concept of programmable computers. He served as president for this mid-sized computer company. In 1978 Emil and his family moved to Northeast Pennsylvania where he followed his passion for food and, along with his wife and children, opened Jim Dandy's Saloon and Eatery in Edwardsville. In 1984, the Clarks Summit location opened and the Goryeb family enjoyed 29 years of providing food, fun and entertainment to the people in and around the area. Emil was responsible for coining the phrase and restaurant slogan, "You'll Have a Jim Dandy Time," and could be heard singing and performing voice-overs for the Jim Dandy's radio and television commercials. He was known for singing at both restaurant locations and even sang the song for the first dance at his children's wedding receptions. Emil was a devoted and loving husband, father, grandfather, brother and uncle who truly enjoyed spending time with his family. His son, Gregg; brother, Naim; sister, Alice and her husband Harold Nelson; and sisters-in-law, Marguerite Goryeb, Marie Gilia, Grace and her husband Harold Knipper preceded him in death. In addition to his wife, Dorene, he is survived by his son, Glen and his wife Bridget Goryeb of Dalton; his daughter, Tracy and her husband Joseph Zarola of Shavertown; four grandchildren, Emily and Gregg Goryeb, and Patrick and Adam Zarola; a brother, Joseph Goryeb of Mendham, New Jersey; a sister, Lila and her husband Adrian Basili of Gillette, New Jersey; sisters- and brothers-in-law, Virginia Goryeb of Whitehouse Station, New York, Mike and Maureen Schmid of Lake Luzerne, New York and Dave Gilia of Carbondale; and several nieces and nephews. Celebration of Emil’s Life will be held Saturday at 9 AM from McLaughlin’s, 142 South Washington Street in Wilkes-Barre with a Funeral Mass at 10 AM in the Church of Saint Ignatius Loyola, North Maple Avenue in Kingston. Interment will be in Our Mother of Sorrows Cemetery, Finch Hill, Carbondale. Visitation will be held at McLaughlin’s on Friday from 5 to 8 PM. Memorial donations are preferred and may be made to: Transplant Foundation, Gift of Life Donor Program, 401 North 3rd Street, Philadelphia, PA 19123, or, The Goryeb Children's Hospital, 100 Madison Avenue, Morristown, NJ 07962. As he was a 2008 recipient of a successful kidney transplant, Emil’s family asks everyone to consider becoming an organ donor, and extends special thanks to Dr. Robert Engel, Renal Consultants, the staff at Wilkes-Barre General Hospital and the University of Pittsburgh Medical Center and Erwine Health Care for their compassionate care. Permanent messages and memories can be shared with Emil’s family at www.celebratehislife.com

Emil A. Goryeb of Kingston passed away on Wednesday, May 4th at Wilkes-Barre General Hospital following complications from an illness. He is survived by his wife, Dorene Schmid Goryeb. Together, they celebrated their 57th wedding anniversary... View Obituary & Service Information

The family of Emil Goryeb created this Life Tributes page to make it easy to share your memories.

Emil A. Goryeb of Kingston passed away on Wednesday, May 4th...