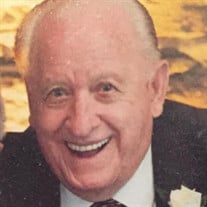 Elmer (Emilio) Berganya, 99, of Wilkes-Barre, passed away at home in the company of his loving daughter Jean and his faithful son-in-law Tom who never left his side on October 13, 2021. Elmer was born in Swoyersville to the late Louis and Leonilda Berganya and was a graduate of Swoyersville High School, where he excelled in both football and baseball. Following high school, he served in the United States Army 150 Combat Engineers in the European Theatre as a decorated Veteran participating in five battles, including the Battle of the Bulge. Elmer worked at the United Pants factory before joining the family business, the original Bingo's Hoagies in Swoyersville. An accomplished golfer, Elmer was a lifelong member of the Fairway Club playing into his 90's. He enjoyed spending time with his grandchildren as well as going to the casino. His wife, Lottie Anuszkiewicz Berganya; daughter, Marie Ranieri; brothers, Ted and John (Bingo); and sisters, Ida, Alda, Edith, and Balinda, preceded him in death. His daughter, Jean Harfman, and her husband, Tom, of Wilkes-Barre; his son-in-law, Leonard (Janice) Ranieri; his four grandchildren, Lenard (Kelly), Nicholas, Jenna (Drew), John (Nicole); six great-grandchildren; nieces, nephews, other family, and friends will miss him very much. Our family is thankful for the loving and compassionate care he received from his caretaker, Jessica, Debbie and Susie from Home Sweet Home, Mike Blasick PT from Compass Home Health, Doctors Aliasgar Chittalia, Michael Rittenberg, Farook Shroff, and Indubai Patel, and the VAMC Outpatient Services team, and for our many neighbors who assisted Elmer in enjoying a good life in his final years. Celebration of Elmer's Life takes place Saturday, October 16, 2021 with visitation beginning at 9:30 AM followed by a prayer service at 11 AM at McLaughlin's, 142 South Washington Street in Wilkes-Barre. Interment with Military Honors will be in Mount Olivet Cemetery. Donations to Hospice of the Sacred Heart will honor Elmer's memory. Share memories and condolences with Elmer's family at www.mjmclaughlin.com

Elmer (Emilio) Berganya, 99, of Wilkes-Barre, passed away at home in the company of his loving daughter Jean and his faithful son-in-law Tom who never left his side on October 13, 2021. Elmer was born in Swoyersville to the late Louis and Leonilda... View Obituary & Service Information

The family of Elmer Berganya created this Life Tributes page to make it easy to share your memories.