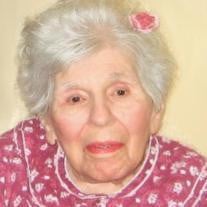 Elizabeth Zira Brody, 97, formerly of Blackman Street in Wilkes-Barre died Saturday in the Partridge-Tippett Nursing Facility at Wesley Village. Born December 27, 1914 in Wilkes-Barre she was a daughter of the late Samuel Elias and Waheba Brody. Zira attended city schools and Dean School of Business at Wyoming Seminary. Before retiring Zira was employed by Pennsylvania Gas & Water Company for thirty-one years. Her sister, Amelia, brother, George and an infant brother preceded her in death. Zira's entire family is grateful to the staff, especially the aides, at Wesley Village for the loving and compassionate care they gave her. Zira will be missed by her sister, Mirla Schultz of Rochester, New York; brother, William Brody of Cleveland, Ohio; nieces and nephews, including Reba and her husband Jack Witko and their daughter, Jaclyn of Warrior Run, George and his wife Peggy Brody of Atlanta, Georgia, Robert and his wife Barb Brody and their daughters, Samantha and Jessica of Mechanicsburg, Daniel and his wife Suzanne Brody and their sons, George, Dan and Sammy of Huntington, West Virginia, and Barbara Jean Brody of Swoyersville. Celebration of Zira’s Life will be held Friday at 9 AM from McLaughlin’s – The Family Funeral Service, 142 South Washington Street in Wilkes-Barre with services at 10 AM in Saint Mary's Antiochian Orthodox Church. Interment will be in Maple Hill Cemetery in Hanover Township. Visitation will be held at McLaughlin's on Thursday from 4 to 8 PM. Memorial donations are preferred and may be made to Alzheimer's Association, 57 North Franklin Street, Wilkes-Barre, 18701. Permanent messages and memories can be shared with Zira’s family at www.celebrateherlife.com

Elizabeth Zira Brody, 97, formerly of Blackman Street in Wilkes-Barre died Saturday in the Partridge-Tippett Nursing Facility at Wesley Village. Born December 27, 1914 in Wilkes-Barre she was a daughter of the late Samuel Elias and Waheba Brody. Zira... View Obituary & Service Information

The family of Elizabeth Zira Brody created this Life Tributes page to make it easy to share your memories.