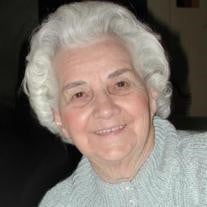 Eleanor Dunsavage Mangino, 86, of Hanover Township died Monday morning with her family at her side at Hospice Community Care. Born August 11, 1925 in Wyoming she was a daughter of the late Peter and Stella Shady Dunsavage. Eleanor was a 1943 graduate of Wyoming High School. Prior to marriage to her husband of sixty years, Samuel J. Mangino, Eleanor was a seamstress in the local garment industry. A devoted wife, mother, grandmother and friend she taught those around her more about how to treat a person than they would have ever learned without her. Eleanor was a long time member of the Parish of Saint Robert Bellarmine and a communicant at the Church of Saint Aloysius. She was also a member of the KayCees of Knights of Columbus Council 302. Her brother, Edward Dunsavage preceded her in death. She will be greatly missed by her husband, Samuel; sons, Louis and his wife Diane Mangino of Plains and Peter and his wife Maureen Mangino of Nanticoke; grandchildren, Kim, Kara, Louis and Jamie Mangino; and a sister, Agnes Jaken of Sayreville, New Jersey Eleanor’s entire family is grateful to the physicians, nurses and staff of Geisinger Health Care System, Special Care Hospital in Nanticoke, Hampton House and especially those at Hospice Community Care for the loving care extended to her. Friends and family are invited to join in the celebration of a Funeral Mass on Thursday at 10 AM in the Church of Saint Nicholas. Interment will be in Mount Olivet Cemetery in Carverton. A family service will be held beginning Thursday at 8:30 AM from McLaughlin's - The Family Funeral Service, 142 South Washington Street in Wilkes-Barre. Memorial donations are preferred and may be made to Saint Nicholas Capital Campaign Fund, 226 S. Washington St., Wilkes-Barre, PA 18701-2897. Permanent messages and memories can be shared with Eleanor’s family at www.celebrateherlife.com

Eleanor Dunsavage Mangino, 86, of Hanover Township died Monday morning with her family at her side at Hospice Community Care. Born August 11, 1925 in Wyoming she was a daughter of the late Peter and Stella Shady Dunsavage. Eleanor was a 1943... View Obituary & Service Information

The family of Eleanor Mangino created this Life Tributes page to make it easy to share your memories.