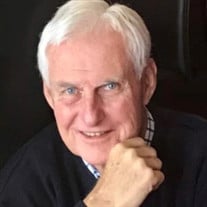 Edward M. Whalen, Jr., 76, of Kingston, passed away Friday, November 13, 2020, at Wilkes-Barre General Hospital, from congestive heart failure. Born in Wilkes-Barre on March 15, 1944, Ned was the eldest of five children of the late Dr. and Mrs. Edward M. Whalen, Sr. Ned attended Scranton Preparatory School and graduated from E.L. Meyers High School in 1962. He received a BA in history from LaSalle College, Philadelphia, in 1966 and an MA in history from the University of Scranton. Ned enjoyed many years teaching United States and World History at Coughlin High School, retiring in 2002. He was a member of St. Ignatius of Loyola Church in Kingston and their Holy Name Society. Ned was also Past-President of the Wilkes-Barre Friendly Sons of St. Patrick (1985) as well as having been named their Man of the Year (1994). He was preceded in death in October 2013 by his youngest brother, Patrick. Ned was a lover of life, people, and fun, a quality that was evident in several areas. A dedicated teacher, he took great delight in bringing the details of history to life for his students at Coughlin. He was also a lifelong sportsman who loved the thrill of competition, either as a participant or as a spectator. He enjoyed decades as a successful tennis player, winning many trophies in local tournaments. He loved basketball, playing in various leagues throughout Wyoming Valley and even abroad, where he starred on a Swiss basketball team during his year of study at the University of Fribourg in Switzerland. In later years Ned pursued the game of golf, a sport in which he admittedly did not excel, but so enjoyed because of the laughter and friendships it afforded him. He was a member of Irem Country Club and spent countless hours on their beautiful course, as well as playing at many other venues, both locally and in Myrtle Beach, SC. As well, he loved the role of fan, rooting on his favorite teams, including Notre Dame, Pitt, the Philadelphia Eagles, and the Pittsburgh Steelers. Ned also had a love for travel. From his college days and onward, he was involved in a trip of some kind to various countries. His love of history and his innate curiosity about other cultures drove him to see most of the European continent, as well as China. However, as a typical Wyoming Valley Irish-American, he loved visiting Ireland and enjoyed countless trips there, mostly organized by fellow travelers Kevin Boylan or Mary McKenna. Nothing made Ned happier than having a drink with family or friends, shooting the breeze somewhere, whether in a pub in Galway or in our own American Legion #644 in Swoyersville. Ned is survived by his loving wife of 46 years Maureen (Lavelle), daughter Kelly Raub and husband Tim, Pottstown; son Ned III and his wife Sara, Kingston; grandchildren Sam Whalen and Kasey Whalen; sisters Molly Whalen, Wilkes-Barre, and Jeanne Grant, Austin, Texas; brother Ray Whalen and his wife Maureen, Glen Summit; sister-in-law Ruth Whalen; and many nieces, nephews, and cousins. In lieu of a viewing, a memorial site will be provided at 570 Westmoreland Avenue, Kingston, for friends to pay their respects to Ned on Wednesday, November 18th, and Thursday, November 19th. A Funeral Mass will be celebrated at 10:15 AM on Friday, November 20th in the Church of Saint Ignatius Loyola in Kingston. Mask and social distancing protocols, and a capacity of 80 will be in effect at the church. Live streaming of Ned's service will be provided at https://my.gather.app/remember/edward-whalen for those who wish to participate remotely. A Memorial Mass and celebration is planned for mid-summer of 2021, God Willing. Donations in Ned's memory can be made to the Wilkes-Barre Friendly Sons of St. Patrick, c/o Ned Whalen III, 575 Gibson Ave., Kingston, PA 18704, or to the Irem Shepherds, PO Box 307, Dallas, PA 18612. Share memories and condolences with Ned's family at www.mjmclaughlin.com

Edward M. Whalen, Jr., 76, of Kingston, passed away Friday, November 13, 2020, at Wilkes-Barre General Hospital, from congestive heart failure. Born in Wilkes-Barre on March 15, 1944, Ned was the eldest of five children of the late Dr. and... View Obituary & Service Information

The family of Edward M. Whalen Jr. created this Life Tributes page to make it easy to share your memories.