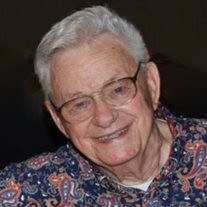 Edward Aloysius Conologue, 90, a longtime resident of Forty Fort, died peacefully in the presence of his loving family on February 28th, 2014. Born April 26, 1923 in Glen Cove, New York, he was a son of the late Edward and Margaret Wolfle Conologue. Ed, as he was lovingly referred to by his friends and family, attended Saint Patrick’s Elementary School and graduated from Glen Cove High School, where he was voted “Best Dressed” in his graduating class. He continued his education at Pace University business school. An Army veteran of World War II, he served our country honorably from 1942 to 1944. Early in his career, Ed worked for and then became part-owner of Forrest Drug Products Company. He also worked for the Pocono Downs Racetrack and the Pennsylvania Liquor Control Board before retiring in 1988. A life-long devout Catholic, Ed was a longtime member of the Parish of Saint Ignatius Loyola in Kingston. However, during his years at Greenbriar, he always attended weekly mass and holy days at Gate of Heaven church in Dallas. He had also been an active member of the Holy Name Society of the former Parish of Holy Name of Jesus in Swoyersville. Ed was also known to be an avid Notre Dame football fan. He was often referred to as “Honest Ed, Friend of the People” as friends and family always valued his straight-forward truthfulness and willingness to help others. He also never missed an opportunity to thank those who helped him. Through him, the practice of saying please and thank you was instilled in his children, grandchildren and great-grandchildren. Ed loved spending time with his family and helping and supporting them in any way that he could. For many years, he was the primary means of transportation for getting both his children and grandchildren to and from elementary school. He also enjoyed spending time with his extended family on summer vacation at Cape May Point, an annual tradition that started in 1955. He was preceded in death by his loving wife of sixty-two years, Helen Andes Conologue. Sisters, Joan Conologue Carlstrom and Frances Conologue Mahony also preceded him in death. He will be greatly missed by his children, Robert and his wife Diane Conologue of Darien, Connecticut, Edward Conologue of Swoyersville and Joan and her husband William Abrams of Dallas; grandchildren, Lisa and her husband Scott Cruikshank of Darien, Connecticut, Alison Conologue of Stamford, Connecticut, Brian Conologue of Brooklyn Heights, New York, Matthew and his wife Theresa Conologue of Fredericksburg, Virginia, Catherine Polachek of Swoyersville, Elizabeth and her husband Michael Finarelli of Waldorf, Maryland, James Abrams of Dallas and Sarah and her husband Eric Wagner of Mauldin, South Carolina; great-grandchildren, Alexander and Kaitlyn Cruikshank, Eric and Erin Conologue, Madison Polachek and Michael Finarelli; brother, Arthur and his wife Margie Conologue of Syosset, New York; other family and friends. Ed’s entire family is grateful for the loving care he received from the staff of the Village at Greenbriar over the past seven years. During this extended stay at Greenbriar, Ed was blessed with close personal friendships that made his stay there both special and enjoyable. Ed’s children are also very appreciative for the long-term care, kindness and friendship provided by Bill Abrams, his son-in-law. Celebration of Ed’s Life will begin Thursday at 9 AM from McLaughlin’s – The Family Funeral Service, 142 South Washington Street in Wilkes-Barre with Funeral Mass at 10 AM in the Church of Saint Ignatius Loyola. Interment will be in Saint Mary's Cemetery in Hanover Township. Visitation will be held at McLaughlin's on Wednesday from 2 to 4 and 7 to 9 PM. Donations may be made to the American Heart Association, or perform an act of kindness for someone in need. Permanent messages and memories can be shared with Ed’s family at www.celebratehislife.com

Edward Aloysius Conologue, 90, a longtime resident of Forty Fort, died peacefully in the presence of his loving family on February 28th, 2014. Born April 26, 1923 in Glen Cove, New York, he was a son of the late Edward and Margaret Wolfle... View Obituary & Service Information

The family of Edward Aloysius Conologue created this Life Tributes page to make it easy to share your memories.