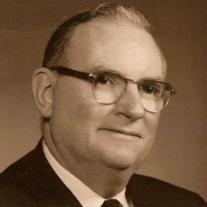 Edward Jerome Burns 91 of High Point, NC died Sunday after a long illness at St. Mary’s County Nursing Center, Leonardtown, Maryland. Born 23 October 1914 in his parent’s home in Wilkes-Barre he was the eighth of nine children of Irish immigrants, the late Michael J. and Mary Ellen Burke (Byrne) Burns. Following graduation from Wilkes-Barre Business College in 1934, Mr. Burns worked for the Civilian Conservation Corps and did survey work in Hickory Run and other Pennsylvania sites. He worked for the Corps of Engineers in Pittsburgh where he met his wife, Ruby and graduated from Carnegie Tech. Mr. Burns began his career in communications with Commonwealth, Luzerne and Bradford County telephone companies. He left Commonwealth to work for Ridgeway and Meadville, Pennsylvania and Jamestown, New York telephone companies, attaining the positions of Vice President, Chief Financial Officer and Comptroller of those three companies. Edward loved his God, family, and country. He was particularly proud of the more than eighty years of combined service of his children, grandchildren and great-grand child to the Navy and Marine Corps and all of their accomplishments. A song was always in his heart and a joke was just a minute away and, if you had time, a history lesson was there for the asking. Never to stay stuck in the past, he took up computer and genealogy in his mid-seventies, connecting the family to their humble roots, present, and future. He treated everyone he met with respect. His infant daughter, Patricia Eileen and his first born child, Michael Joseph and his eight brothers and sisters preceded him in death. He is survived by his wife of 67 years Ruby D. Shipley Burns of La Plata, Maryland daughter Diane and husband Karoly David of La Plata, Maryland, son Edward Jerome, Jr. of La Plata, Maryland, daughter-in-law, Sharon A. Burns of Arizona, grandchildren Laurie and husband Michael Reed of West Virginia, Daniel Burns and wife Delree of Texas, Patricia and her husband Michael Gibson of Silver Spring, Maryland, Edward David and wife Bonnie of Hughesville, Maryland, Richard David and wife Laurie of Charlotte Hall, Maryland, great- grandchildren Sarah, Kara, Heather, Rachael, Alexander, Justin and Zachary, great- great- granddaughter Alora Nicole, several special nieces and nephews Mary Burns, Eleanor Hamilton, Janet Shipley, Joseph Snavely and Arthur Shipley. Funeral Mass will be celebrated Saturday at 10:00 AM in Sacred Heart-Saint John’s Church, North Main Street, Wilkes-Barre. Interment will be in the St. Mary’s Cemetery, Hanover Township. Friends may call at the church beginning at 9:00 AM Saturday. Contributions can be made to the PARALYZED VETERANS OF AMERICA, P.O. Box 96010, Washington, DC 20090-6010 Arrangements by M.J. McLaughlin Company.

The family of Edward Burns created this Life Tributes page to make it easy to share your memories.