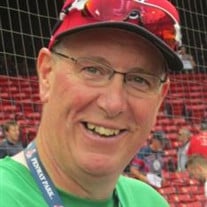 Donald Joseph Shaw, Jr, 50, a great man known for his love of people and humor, died peacefully at his home on October 27, 2016. Don was born in Chelsea, Massachusetts in 1965, the son of Mildred Arnold Shaw and the late Donald J. Shaw, Sr. In 1999 he married the former Heather Mangan of Bear Creek. In addition to Heather, his wife, Don is survived by their children Don and Dillon Shaw, both at home. He is also survived by his mother Mildred Shaw, brothers, Daniel and his wife Betsy Shaw and Douglas Shaw, and a sister, Debra Dowless. He graduated from Quakertown High School in 1983, and from Wilkes University in 1987 with a Bachelors in Political Science. He played on both soccer and baseball teams for Wilkes. He is a member of the Quakertown Sports Hall of Fame as well as the Wilkes University Sports Hall of Fame. Don worked for Whiteman Tower for twenty-four years as VP of Packaging, then Lindenmeyr Munroe as General Manager of Packaging for five years. Don served as assistant coach for Wilkes University Men’s Soccer for twelve years. He also served as coach for White Haven Baseball’s T-Ball, Little League, and Majors teams, and as assistant coach for Mountain Top American Legion baseball team. Don was a force of nature, hard working, and full of integrity. He loved people, his family and friends, and having fun. He especially loved the Boston Red Sox and Patriot teams. Celebration of Don’s Life will begin Tuesday with visitation from 5 to 8 PM at McLaughlin’s, 142 South Washington Street in Wilkes-Barre and continue Wednesday with a Funeral Mass at 9:30 AM in the Church of Saint Jude in Mountain Top. Memorial donations are preferred and may be made to Hospice of the Sacred Heart, 600 Baltimore Drive, Wilkes-Barre, or Saint Jude’s Church Building Fund, 420 S Mountain Blvd, Mountain Top. Memories and condolences may be shared with Don’s family at www.lifecelebrations.com

Donald Joseph Shaw, Jr, 50, a great man known for his love of people and humor, died peacefully at his home on October 27, 2016. Don was born in Chelsea, Massachusetts in 1965, the son of Mildred Arnold Shaw and the late Donald J. Shaw, Sr.... View Obituary & Service Information

The family of Donald J. Shaw Jr. created this Life Tributes page to make it easy to share your memories.