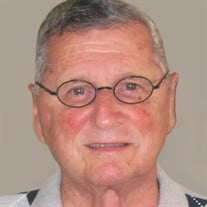 Donald J. Sabatino, 85, of Brooks Estates in Jenkins Township and a longtime resident of Wilkes-Barre died Tuesday. Born March 19, 1931 in Wilkes-Barre he was a son of the late Alphonso and Mary Sangiuliano Sabatino. An Army veteran of the Korean Conflict, he was assigned to the 17th Regiment, 7th Division, George Company and was awarded the Purple Heart for injuries received on July 8, 1953, during the Battle of Pork Chop Hill. He was also awarded the Good Conduct Medal, United Nations Service Medal, National Defense Service Medal, Korean Service Medal, and he was most proud of his Combat Infantry Badge. Following his combat service, he was stationed at Camp Fuji Army Base in Japan where he attained the rank of Sergeant and was honorably discharged in 1954. A 1949 graduate of E.L. Meyers High School, Don worked his way through school as a window trimmer at Pomeroy's Department Store and earned his BS in Education from Wilkes University in 1960 and MS in School Administration from the University of Scranton in 1963. Don was an elementary school teacher and principal for the Wilkes-Barre Area School District. Through his first nine years, he was assigned to Lafayette, Courtright and North Street elementary schools. In 1969, he was named the first principal of the newly formed Daniel J. Flood Elementary School. He retired there in 1993 after thirty-three years of service. After retiring, Don joined the faculty of the education departments of Wilkes University and King's College. He was a proud charter member of the Pennsylvania Association of School Administrators, an emeritus member of PASR and member of the Wilkes-Barre Area Principals Association. He was awarded lifetime membership to the National PTA.   Don was a longtime member of the Parish of Saint Robert Bellarmine at the Church of Saint Aloysius and the American Legion Post 132. An active member of the Health Club at the YMCA, he enjoyed playing squash and was an avid tennis player and jogger for many years. Don will be greatly missed by his loving wife of forty-seven years, the former Judith Labows; daughter, Susan and her husband Samuel Elias of Tunkhannock; son, Donald A. Sabatino of Philadelphia; grandchildren, Margaret, Joseph, Thomas and Emma Elias; brother, Robert L. and his wife Anita Sabatino of Wilkes-Barre; brother-in-law, Dr. John N. and his wife Mary Louise Labows of Horsham; nieces, nephews, other family and friends. Don’s family will celebrate his life privately. Memorial donations may be made to the Medical Oncology Associates Prescription Assistance Fund, 382 Pierce Street, Kingston, PA 18704. Memories and condolences may be shared with Don’s family at www.lifecelebrations.com

Donald J. Sabatino, 85, of Brooks Estates in Jenkins Township and a longtime resident of Wilkes-Barre died Tuesday. Born March 19, 1931 in Wilkes-Barre he was a son of the late Alphonso and Mary Sangiuliano Sabatino. An Army veteran of the... View Obituary & Service Information

The family of Donald J. Sabatino created this Life Tributes page to make it easy to share your memories.