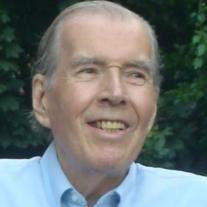 Donald Imrich Buzinkai, PhD., beloved husband, devoted father and grandfather, mentor and friend, passed away Wednesday, October 10th at his home in Wilkes-Barre. Affectionately known to friends and colleagues as Buzz, he was born September 10, 1939 in Brooklyn, New York. Dr. Buzinkai was Professor Emeritus of Political Science, retiring from King’s College in 2000 following a career that began in 1964. He earned his BA degree in History from Saint Francis College in Brooklyn in 1960, his MA in 1961 and Ph.D. in 1964, both in Political Science, from New York University. He was the founding chair of the Department of Political Science at King’s College, where he served as the pre-law advisor and mentor to his students. He was an active member and held elected positions in political science societies including Pennsylvania Political Science Association and Northeastern Political Science Association. He authored numerous publications and was an active discussant at professional conferences. Buzz was an avid tennis player and enjoyed following New York baseball and football teams. He will be greatly missed by his wife, the former Veronica (Ronnie) Feger, with whom he celebrated fifty years of marriage on August 25th; children, John and his wife, Serena and son, Brennan of Chattanooga Tennessee; Elizabeth and her husband, Steve Coffey and daughters, Amanda and Melanie of Stonington Connecticut; Christopher and his wife, Patricia and sons, Zackary, William and Quinn of Kingston; Donald and his wife, Lora and children, Zoe and Noah of Madison, New Jersey. The Buzinkai family is grateful to Dr. David Greenwald and his staff for their care and support of Buzz during his illness. Celebration of Donald’s Life will be held Monday with a Funeral Mass at 1 PM in the Chapel of Christ the King on the campus of King’s College. Visitation will be held Sunday from 2 to 5 PM at McLaughlin’s – The Family Funeral Service, 142 South Washington Street in Wilkes-Barre. A memorial scholarship has been established in honor of Dr. Buzinkai. Donations may be made to King’s College, Office of Institutional Advancement, 133 N. River Street, Wilkes-Barre, PA, 18711 Permanent messages and memories can be shared with Buzz's family at www.celebratehislife.com

The family of Donald Imrich Buzinkai Ph.D. created this Life Tributes page to make it easy to share your memories.