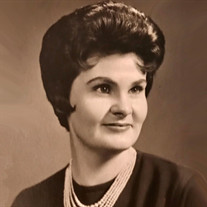 Dolores Annette Redington Stevens, 86, a West Pittston native, passed away peacefully in the presence of her loving family on February 14, 2020. Born June 2, 1933 she was a daughter of the late Charles Francis and Annette Davis Redington. Dolores attended Saint John's School in Pittston and graduated from West Pittston High School. Dolores raised her family in Forty Fort before relocating to New Jersey. She worked for the Department of Defense in Philadelphia from 1975 to 1996, receiving many awards for excellence throughout her career. Dolores was very proud of her children and found great pleasure in their many achievements in life. She was a caring, loving, and devoted mother, grandmother, and great-grandmother. After retirement, one of her most favorite pleasures was lunch outings with very dear friends who shaped her journey. She also enjoyed baking, cooking, and caring for her Keeshond puppy. Her affection for Keeshonds was extraordinary. Over the last two years, Dolores traveled to Florida, California, and Pennsylvania to joyously and lovingly share in the weddings of four of her grandchildren, fulfilling one of her greatest wishes. Her husband, Donald Fredrick Stevens, died on January 26, 1995, and a son, Thomas Frank, also preceded her in death. Dolores will be greatly missed by her children, Linda Livingston of Pennsylvania, Kenneth Delicati of Pennsylvania, Deborah and her husband Joseph Leary of Forty Fort, and Charles Frank of New Jersey; grandchildren, Donna (Bill) Askew, Lisa (Sam) Sanguedolce, Lauren (Jason) Nolan, Kenny Delicati, Scott Livingston, Christopher (Eva) Livingston, Meghan Frank, Kaitlyn Frank, Christian (Reagan) Frank, and Josh Frank; great-grandchildren, Joseph, Megan, Madison, Avery, Kahlynn, Ari, and Neecie; a brother, Charles Francis (Muriel) Redington of Delaware; nieces, nephews, other family and friends. Dolores's family will celebrate her life privately. Memories and condolences may be shared with Dolores's family at www.celebrateherlife.com

Dolores Annette Redington Stevens, 86, a West Pittston native, passed away peacefully in the presence of her loving family on February 14, 2020. Born June 2, 1933 she was a daughter of the late Charles Francis and Annette Davis Redington. Dolores... View Obituary & Service Information

The family of Dolores Redington Stevens created this Life Tributes page to make it easy to share your memories.