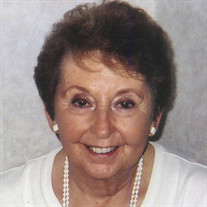 Delores Dalon Corbett, 92, of Wilkes-Barre passed away on Friday, June 18, 2021. Born March 6, 1929 in Wilkes-Barre she was a daughter of the late William A. and Grace Williams Dalon. A 1947 graduate of E.L. Meyers High School, Delores continued her education at Fairleigh Dickinson University. Delores was an executive secretary at Carr Consolidated Biscuit Co. in Wilkes-Barre and an executive assistant at AT&T Bell Laboratories / Alcatel-Lucent Technologies in Whippany and Murray Hill, New Jersey, for thirty years before retiring in 1984. She returned to Wilkes-Barre in 1987. Delores and Bernie, her beloved husband of sixty years, enjoyed playing golf together and their worldly travels by plane, ship, and rail. Delores was kind and gracious and had much love for her family and friends. She was always willing to help whenever needed. Delores was a member of the Parish of Our Lady of Fatima and a communicant at the Church of Saint Mary of the Immaculate Conception in Wilkes-Barre. Her husband Bernard, the love of her life, passed away on November 16, 2012. Her sisters, Muriel Chapman and Louise (Betty) Siegel, and a brother, William W. Dalon, also preceded her in death. Her son, Brian P. (Rick) Morrissey and his wife Diane of Wilkes-Barre; grandson, Stephen B. Morrissey; great-granddaughters, Grace and Emily; nephew, Ernest W. Siegel, his wife, Yvonne and their sons, Austin and Colin; nieces, Roberta Conrad, her husband, Warren and their children, Clifton and Mary Bhaskar, Linda Wilson and Lauren Cooper; other family and friends will miss her much. Father J. Duane Gavitt will lead the Celebration of Delores's Life at 11 AM on Tuesday, June 22, 2021 at McLaughlin's, 142 South Washington Street in Wilkes-Barre. Visitation begins at 10 AM. Donations to Saint Jude Children's Research Hospital in Memory of Delores are preferred. Share memories and condolences with Delores's family at www.mjmclaughlin.com

Delores Dalon Corbett, 92, of Wilkes-Barre passed away on Friday, June 18, 2021. Born March 6, 1929 in Wilkes-Barre she was a daughter of the late William A. and Grace Williams Dalon. A 1947 graduate of E.L. Meyers High School, Delores continued... View Obituary & Service Information

The family of Delores Dalon Corbett created this Life Tributes page to make it easy to share your memories.

Delores Dalon Corbett, 92, of Wilkes-Barre passed away on Friday,...