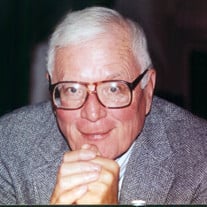 Cornelius P. ‘Neil’ Healy, 91, of Forty Fort died Wednesday afternoon with his family at his side. Born July 12, 1923 in Cork City, County Cork, Ireland he was a son of the late James and Margaret Drinan Healy. The Healy family moved to New York when Neil was a young child. He was raised and educated in New York City and graduated from the LaSalle School. He enlisted in the Air Force where he served on a B-29 in the 313th Wing of the 20th Air Force in the Pacific Theater during World War II. Following his honorable discharge he attended Iona College in New Rochelle, New York where he earned his BBA in accounting. Shortly after graduation he met Hilda who was a Registered Nurse at Memorial Sloan Kettering Cancer Center in New York. After their marriage on February 14, 1953 they resided in New York City where he was employed at Frances H. Leggett Food Company. In 1958 they moved to Wilkes-Barre where Neil was employed at Eastern Penn Supply Company for thirty-seven years as salesman and manager of building material and supplies. He served on numerous business committees, received many awards and was named a Hall of Fame member of the Homebuilders Association of Northeastern Pennsylvania. Neil was active with the scouting program and Holy Name Society at the former Parish of Saint Therese in Wilkes-Barre. He was a third degree Knight of Columbus and a member of the American Legion Post 644 and B.P.O. Elks Lodge 109. Neil enjoyed travelling, swimming in the ocean and golfing. He was especially fond of spending time with his family and many good friends. His son, James David Healy died in 2002. A daughter-in-law, Karen Healy, sister, Margaret Padian and brothers, James, Michael, Daniel and Joseph Healy also preceded him in death. Neil's entire family is grateful to those who cared for him. He will be greatly missed by his wife of sixty-one years, the former Hilda Hausler; sons, Chuck of Wilkes-Barre and Neil of Denver, Colorado; grandsons, Ryan, Scott, Dalton and Darian Healy; and great-granddaughters, Charlize and Lilly Healy. Celebration of Neil’s Life will be held Monday at 9 AM from McLaughlin’s, 142 South Washington Street in Wilkes-Barre with Funeral Mass at 10 AM at the Church of Saint Elizabeth Ann Seton Parish in Swoyersville. Interment will be in Saint Mary's Cemetery in Hanover Township. Visitation will be held at McLaughlin's on Sunday from 2 to 5 PM. Memorial donations are preferred and may be made to American Heart Association of the charity of your preference. Permanent messages and memories can be shared with Neil’s family at www.celebratehislife.com

Cornelius P. &#8216;Neil&#8217; Healy, 91, of Forty Fort died Wednesday afternoon with his family at his side. Born July 12, 1923 in Cork City, County Cork, Ireland he was a son of the late James and Margaret Drinan Healy. The Healy family... View Obituary & Service Information

The family of Cornelius Healy created this Life Tributes page to make it easy to share your memories.