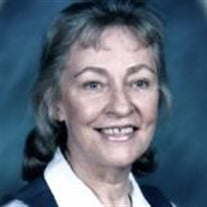 Claire Druffner Meehan, 82, passed away at home in Denville, New Jersey, following a short illness. Born in Wilkes-Barre, she has lived in Denville for the past twenty-nine years. She was a 1950 graduate of Saint Mary’s High School in Wilkes Barre. Prior to marriage Claire worked as a supervisor at Blue Cross Blue Shield of Northeastern Pennsylvania but the career she loved most was that of mother, grandmother, and great-grandmother. She spent her life serving God and her family. She had a special devotion to Saint Francis and also loved her animals. Claire enjoyed crocheting, knitting and sewing and encouraged these skills in her children and grandchildren. Claire was a homemaker and a member of Saint Virgil’s Church. She was also a member of Primetime where she continued to learn and share her faith. Faithful and gracious in life and in death, Claire will be spending Christmas with Jesus this year. She will be deeply missed by her family and friends. Claire is survived by her loving husband, James C. Meehan; and five devoted children, Dolores Alea of Miami, Florida, Sharon her husband Ralph Shefferly of Caledonia, Michigan, Maureen and her husband Michael Murray of Lawrence, Kansas, Theresa Riccardelli of Westwood, New Jersey and James A. Meehan of Lancaster; her beloved brother, Lewis Druffner of Athens; and cherished grandchildren, Stephanie Alea and her fiancé Keith Kenny, Kristen Alea, Meggie Alea, Katie Alea, Anthony & Bethany Shefferly, Christopher & Bryna Shefferly, Andrea Shefferly, Celeste Shefferly, Brianna Shefferly, John Murray, Tess Murray, Rosemarie Murray, Kolbe Murray, Daniel Murray, Xavier Murray, Mariclare Murray, Christiana Riccardelli, Meghan Riccardelli, Genevieve Riccardelli, Zachary Riccardelli, Marielle Riccardelli, James Meehan, Joseph Meehan, Brian Meehan and Caitlin Meehan; as well as five great grandchildren; and fourteen nieces and nephews. She is predeceased by three brothers, two sisters, and a son-in-law. Visitation will be at the McLaughlin’s, 142 South Washington St., Wilkes-Barre on Sunday, December 21st from 1 to 3 PM. Funeral Mass will be celebrated at the Chapel of Christ the King, King’s College, Wilkes-Barre at 10 AM on Monday, December 22nd. Interment will follow in Saint Mary’s Cemetery. Permanent messages and memories can be shared with Claire’s family at www.lifecelebrations.com

Claire Druffner Meehan, 82, passed away at home in Denville, New Jersey, following a short illness. Born in Wilkes-Barre, she has lived in Denville for the past twenty-nine years. She was a 1950 graduate of Saint Mary&#8217;s High School in... View Obituary & Service Information

The family of Claire Druffner Meehan created this Life Tributes page to make it easy to share your memories.

Claire Druffner Meehan, 82, passed away at home in Denville,...