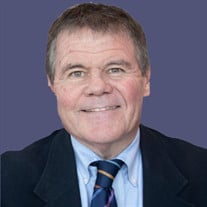 Christopher S. Alexander, Ph. D., 64, of Wyoming, beloved husband of Melissa, and father of Maria and Scott, died at his home surrounded by his loving family on Sunday, September 12, 2021. Born August 14, 1957 in Wilkes-Barre he was a son of the late Dr. Robert J. Alexander and Grace Munley Alexander. Chris grew up in Wilkes-Barre, attended St. John the Evangelist Elementary School, and was a graduate of the Bishop Hoban High School Class of 1975, where he was the Class President. He graduated from King's College with a BA in Government and Politics and a Minor in Business Administration. He received his MBA from American University, Washington, D.C., and earned his Ph.D. in Strategic Management from the State University of New York at Albany. Like his father, Chris chose a profession in academia. He began his career at College Misericordia in 1983 where he taught Finance before being hired at Keuka College, Keuka Park, NY where he taught from 1984 to 1989. At Keuka, he became a tenured Associate Professor and was the Chair of the College's Division of Business and Public Affairs. He accepted a faculty position at King's College and the opportunity to return to Wilkes-Barre. He was a member of the McGowan School of Business faculty and rose to the academic rank of Professor. In 2011, he received the Academy of Educational Leadership's Outstanding Educator Award. He held the PNC Distinguished Service Professorship from 2007-2012, and was the 2005 Recipient of the Max and Tillie Rosenn Outstanding Faculty Teaching Award. Chris loved teaching, and his classes on business, management, and marketing also brought powerful lessons of faith and life. His students recognized his passion for teaching. In course reviews, they frequently commented that his classes were challenging, but he was always fair, respectful, and very, very funny. He taught at King's College for 32 years, shaping generations of graduates who will never forget him and how committed he was to them and their academic and personal growth, even if that meant teaching from a hospital room, which he did last semester. And even in that class, he made them laugh. Chris selflessly lived a life of service to others and served his community in numerous roles. Included among them was his sequential service as Board member, Secretary, Board Vice-President, and Board President of the Wyoming Valley Children's Association. He also served as Interim Director of the Wyoming Valley Children's Association for almost a year. He was also a proud and long-time member and past-President of the Friendly Sons of St. Patrick. He was a member of St. Therese's Parish in Shavertown. Chris was predeceased by his daughter Maria Therese Alexander on May 30, 2003. Since that day, not an hour went by that Chris and Melissa didn't think of their Maria and cherish her memory. In addition to Melissa and Scott, a senior at King's, Chris is survived by his brother, Robert, and sister-in-law, Donna of Newtown, PA, and their children Robert, III, Caileen, Ryan, and Matthew. He is also survived by additional brothers- and sisters-in-law, nephews and nieces, and numerous cousins. He and Melissa were married in 1995 and would have celebrated their twenty-sixth anniversary on October 6th. Together, they very much enjoyed visiting New Orleans, LA, where Chris had taught at Our Lady of Holy Cross College, while on a sabbatical from King's. Naturally, Chris had many friends in New Orleans. But, that was typical of him. He had a huge personality and lit up any room he entered. He also had the uncanny ability to make anyone he was talking with, even those he had just met, feel like they were the closest and oldest of friends. He was a man with many best friends. He was also a lifelong devoted and die-hard fan of the Green Bay Packers. Last Spring, Chris was asked to give advice to King's graduating Class of 2021. He told them that he hoped they would always strive to be the best they could be, and that they would always give their all and never settle for second best. He then closed by saying, "Lastly, I hope you know that there is a God that loves you and expects you to use all the gifts and talents you have been given to make this world better for all of us. I not only hope, but know that you can and will." For him it wasn't just advice, but a statement of the life he led. Celebration of Chris's Life begins Friday, September 17th with visitation from 4 to 7 PM at McLaughlin's, 142 South Washington Street in Wilkes-Barre. A Funeral Mass will be celebrated on Saturday, September 18th at 9:30 AM in the Church of Saint Therese on Pioneer Avenue at Davis Street in Shavertown. Burial will be in Saint Mary's Cemetery. Donations to the Wyoming Valley Children's Association, 1133 Wyoming Ave, Forty Fort, PA 18704, or the Dr. Christopher S. Alexander Scholarship Fund, c/o King's College, 133 N. River St., Wilkes-Barre, PA will honor Chris's memory. Share memories and condolences with Chris's family at www.mjmclaughlin.com.

Christopher S. Alexander, Ph. D., 64, of Wyoming, beloved husband of Melissa, and father of Maria and Scott, died at his home surrounded by his loving family on Sunday, September 12, 2021. Born August 14, 1957 in Wilkes-Barre he was a son of... View Obituary & Service Information

The family of Dr. Christopher S. Alexander created this Life Tributes page to make it easy to share your memories.